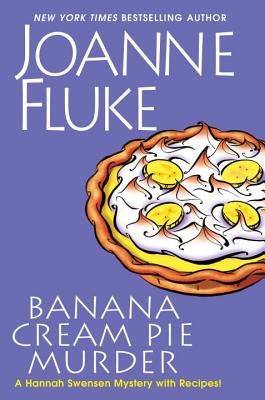 This is book number 21 in the A Hannah Swensen Mystery series.

A romantic seven-day cruise is the perfect start to bakery owner Hannah Swensen’s marriage. However, with a murder mystery heating up in Lake Eden, Minnesota, it seems the newlywed’s homecoming won’t be as sweet as she anticipated . . .

After an extravagant honeymoon, Hannah’s eager to settle down in Lake Eden and turn domestic daydreams into reality. But when her mother’s neighbor is discovered murdered in the condo downstairs, reality becomes a nightmarish investigation. Victoria Bascomb, once a renowned stage actress, was active in the theater community during her brief appearance in town . . . and made throngs of enemies along the way. Did a random intruder murder the woman as police claim, or was a deadlier scheme at play? As Hannah peels through countless suspects and some new troubles of her own, solving this crime—and living to tell about it—might prove trickier than mixing up the ultimate banana cream pie . . .

WEDDING CAKE MURDER
“There are plenty of Fluke’s trademark recipes on view here, and the New York trip and reality-show frame give the episode a fresh twist.” --Booklist

“If your reading habits alternate between curling up with a good mystery or with a good cookbook, you ought to know about Joanne Fluke.” —The Charlotte Observer

CINNAMON ROLL MURDER
“Fans of this wildly popular series will not be disappointed. Fluke has kept this series strong for a long time, and there is still plenty to enjoy for foodie crime fans.” —Booklist

JOANNE FLUKE is the New York Times bestselling author of the Hannah Swensen mysteries, which include Double Fudge Brownie Murder, Blackberry Pie Murder, Cinnamon Roll Murder, and the book that started it all, Chocolate Chip Cookie Murder. That first installment in the series premiered as Murder, She Baked:  A Chocolate Chip Cookie Mystery on the Hallmark Movies & Mysteries Channel. Like Hannah Swensen, Joanne Fluke was born and raised in a small town in rural Minnesota, but now lives in Southern California. Please visit her online at www.JoanneFluke.com.