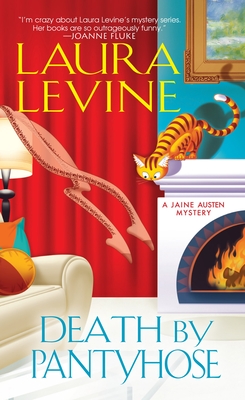 This is book number 6 in the A Jaine Austen Mystery series.

Freelance writer Jaine Austen has never been able to resist the siren call of an Eskimo Pie, just like she can't resist renewing her romance with Andrew, an old crush. With her bank account hitting new lows, she's also just agreed to write jokes for Dorcas, a stand-up comic who throws her pantyhose into the audience as a punch line.

Not only is Dorcas's act a bomb, she is heckled by Vic, a gorgeous fellow comic. Naturally when Vic is murdered with Dorcas's pantyhose and that same Dorcas is standing over his dead body, the police arrest. . .Dorcas. They figure it's an open-and-shut case, although Jaine figures no killer can be that dumb.

But when Jaine sets out to find the real culprit, she is distracted by one dating disaster after another with Andrew--and she may not see the dark side of comedy until she faces the business end of a gun and a cold, deadly grin. . .