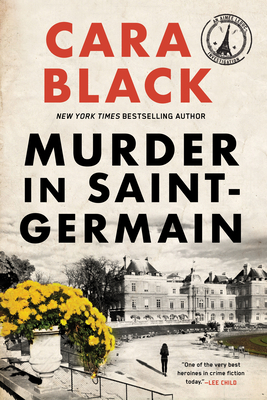 This is book number 17 in the An Aimée Leduc Investigation series.

Paris, July 1999: Private investigator Aimée Leduc is walking through Saint-Germain when she is accosted by Suzanne Lesage, a Brigade Criminelle agent on an elite counterterrorism squad. Suzanne has just returned from the former Yugoslavia, where she was hunting down dangerous war criminals for the Hague. Back in Paris, Suzanne is convinced she’s being stalked by a ghost—a Serbian warlord her team took down. She’s suffering from PTSD and her boss thinks she’s imagining things. She begs Aimée to investigate—is it possible Mirko Vladić could be alive and in Paris with a blood vendetta?

Aimée is already working on a huge case; plus, she’s got an eight-month-old baby to take care of. But she can’t say no to Suzanne, whom she owes a big favor. Aimée chases the few leads she has, and all evidence confirms Mirko Vladić is dead. It seems that Suzanne is in fact paranoid, perhaps losing her mind—until Suzanne’s team begins to die in a series of strange, tragic accidents. Are these just coincidences? Or are things not what they seem?

Cara Black is the author of eighteen books in the New York Times bestselling Aimée Leduc series. She has received multiple nominations for the Anthony and Macavity Awards, and her books have been translated into German, Norwegian, Japanese, French, Spanish, Italian, and Hebrew. She lives in San Francisco with her husband and son and visits Paris frequently.

Praise for Murder in Saint-Germain

"The abiding pleasure of this series is the chance to ride with a cabdriver who wants to discuss Sartre or just tearing around Paris on Aimée’s pink Vespa, making stops at the Jardin du Luxembourg and the Île Saint-Louis, where Aimée has an apartment. Lucky girl."
—Marilyn Stasio, The New York Times Book Review

"An atmospheric thriller with a savvy take on international arms dealing."
—Jane Ciabattari, BBC's Between the Lines

"The pace is, as ever, lickety-split, the sleuthing complex and the small pauses to savour Saint-Germain’s glories delightfully educational."
—The Toronto Star

"Black's detective is hitting her post-pregnancy stride, bringing up bébé while battling the bad guys with the best of them."
—Kirkus Reviews

Praise for the Aimée Leduc investigations

"As always, with airfares so high, Black offers armchair travelers a whirlwind trip through the City of Light."
—USA Today

"Smashing and suspenseful."
—The BBC's Between the Lines

"If you’re looking for a page-turner crime novel that takes you through the ins and outs of Paris, Black has enough material to keep a reader busy for quite a while."
—San Francisco Chronicle

"A gripping plot...[Black] is good at providing the reader with some real suspense."
—Bookgasm

"A winning mystery, as stylish and sexy as the city Cara Black knows so well."
—George Pelecanos

"So authentic you can practically smell the fresh baguettes and coffee."
—Val McDermid

“[Cara Black] is on to a good thing: each of her novels is set in a colorful Parisian neighborhood—and there are a lot of them. The cumulative result of reading this addictive series is a sort of mini-tour of the city, as seen through a filter of fictional murder . . . Leduc is always a reliable and charming guide to the city's lesser-known corners.”
—The Seattle Times