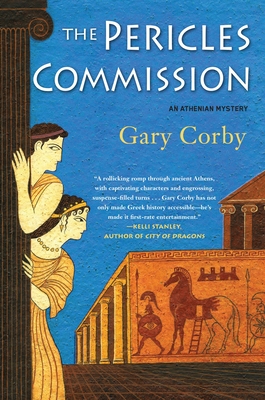 Athens, 461 BC: A clever young man named Nicolaos has been hired by the politician Pericles to find and expose an assassin. Ephialtes, the statesman who brought democracy to Athens, has been murdered, and the city is in an uproar. It looks as if someone is attempting to stifle the world’s first democracy in its infancy. Now, Nico walks the mean streets of Classical Athens in search of the killer with the irritating help of his precocious twelve-year-old brother, Socrates. The increasing number of dead witnesses doesn’t make his job any easier. Meanwhile, Nico juggles other pressing concerns—like getting closer (much closer) to Diotima, the intelligent and annoyingly virgin priestess of Artemis. Can he discover a killer and save Athenian democracy without getting on the wrong side of the gods or the city guard?

Gary Corby is the author of five other Athenian mysteries: The Ionia Sanction, Sacred Games, The Marathon Conspiracy, Death Ex Machina, and The Singer from Memphis. He lives in Sydney, Australia, with his wife and two daughters. He blogs at A Dead Man Fell from the Sky, on all things ancient, Athenian, and mysterious.

Praise for The Pericles Commission

“Classical Athens, a time of bustling rivalry, artistic genius and dramatic events, all superbly captured in this exciting saga of flesh and blood characters who jostle and fight, love and hate as they approach the climax of murderous intrigue.”
—P.C. Doherty

“Those who like their historicals with a touch of humor will welcome Australian author Corby’s promising debut . . . Corby displays a real gift for pacing and plotting.”
—Publishers Weekly, Starred Review

“Details of culture, politics and history are so deftly woven into the threads of the story that life in ancient Athens comes vividly alive.”
—Historical Novel Review

“A highly enjoyable, fast-paced murder mystery which also provides an informative and interesting picture of the political intrigue and day-to-day life in ancient Athens.”
—The Canberra Times (Australia)