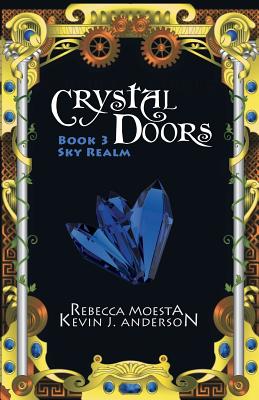 REBECCA MOESTA (pronounced MESS-tuh) wanted to be an author since her early teens, but it wasn't until 1991 that she began writing in earnest. Her solo novels include Buffy the Vampire Slayer: Little Things (2002) and three novels in the Junior Jedi Knights series. With husband, Kevin J. Anderson, she wrote the Crystal Doors trilogy, three movie novelizations, a novelization of the popular StarCraft computer game, a Star Trek graphic novel, and the original graphic novel Grumpy Old Monsters. The team has also written two young adult Titan A.E. novels, two high-tech Star Wars pop-up books, all fourteen novels in the young adult Star Wars Young Jedi Knights series, and three original Star Challengers novels. Moesta has written several short stories, both on her own and with her husband, ghost-written a novel and co-written three science fiction and fantasy books under pseudonyms. In addition to her many fiction credits, she has had photographs, computer art, and nonfiction articles published in numerous magazines. Born in Heidelberg, Germany, to American parents, and raised in Southern California, Moesta has traveled extensively in Europe. She has one son, who is in college. She is also CEO of WordFire, Inc., and WordFire Press, the company that she and Kevin J. Anderson jointly own. Her remaining time is spent serving as final reader and copyeditor on her husband's manuscripts. KEVIN J. ANDERSON has published 120 books, more than fifty of which have been national or international bestsellers. He has written numerous novels in the Star Wars, X-Files, and Dune universes, as well as a unique steampunk fantasy novel, Clockwork Angels, which is based on the new concept album by legendary rock group Rush. His original works include the Saga of Seven Suns series, the Terra Incognita fantasy trilogy, and his humorous horror series featuring Dan Shamble, Zombie PI. He has edited numerous anthologies, including the Blood Lite series, the Five by Five series, and A Fantastic Holiday Season. Anderson and his wife Rebecca Moesta are the publishers of WordFire Press. WordFirePress.com.