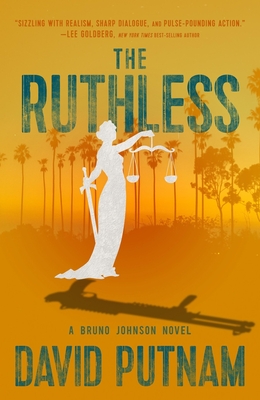 This is book number 8 in the A Bruno Johnson Thriller series.

Bruno Johnson, shaken to his core, but still a formidable force—an unrelenting focus on doing the right thing—unwilling to let anyone or anything stand in his way

Pushed to his emotional limit, Los Angeles County Sheriff Deputy Bruno Johnson struggles to hold his family together while immersed in his unrelenting career. His daughter, Olivia, is a teen mom to twin toddlers; her common-law husband, Derek Sams, is a thug; and one of their little boys has disappeared under his care.

The overwhelming intensity demanded of Bruno on this personal level is compounded by the brutal shotgun murder of a superior court judge and his wife, both friends of his. Bruno cannot ignore these violent crimes even though he’s supposedly off the law enforcement grid—undercover—working an illegal gun sting.

Tragedy strikes Bruno’s life on all fronts: family, friends, and professional—however, none of these colossal forces can match the unthinkable catastrophe that will forever dominate Bruno’s life.

During his career in law enforcement, best-selling author David Putnam has done it all: worked in narcotics, violent crimes, criminal intelligence, hostage rescue, SWAT, and internal affairs, to name just a few. He is the recipient of many awards and commendations for heroism. The Ruthless is the eighth novel in the best-selling Bruno Johnson Crime Series, following The Disposables, The Replacements, The Squandered, The Vanquished, The Innocents, The Reckless, and The Heartless. Putnam lives in the Los Angeles area with his wife, Mary.