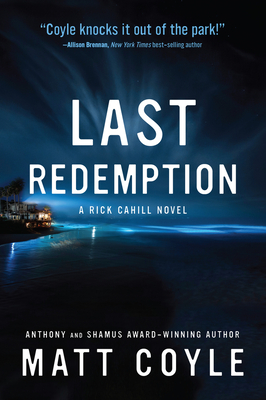 This is book number 8 in the The Rick Cahill Series series.

Will Rick Cahill survive an insidious disease long enough to see his first-born child—or will sadistic killers murder him first?

Rick Cahill is finally living a settled, happy life. His fiancée, Leah Landingham, is pregnant with their first child and he is doing PI work that pays well and keeps him out of danger. Then a doctor gives him the bad news about the headaches he’s been suffering—CTE, the pro football disease that leads to senility and early death—a secret he keeps from Leah and his best friend Moira MacFarlane.

When Moira asks him to monitor her son, Luke—who’s broken a restraining order to stay away from his girl-friend—a simple surveillance explodes into greed, deceit, and murder. Luke goes missing, and Rick’s dogged determination compels him to follow clues that lead to the exploration of high finance and DNA cancer research.

Ultimately, Rick is forced to battle sadistic killers as he tries to find Luke and stay alive long enough to see the birth of his child.

Matt Coyle is the best-selling author of the Rick Cahill PI Crime Series. His novels have won the Anthony Award, the Shamus Award, the Lefty Award, the San Diego Book Award, among others, and have been nominated for numerous Anthony, Macavity, Shamus, and Lefty Awards. Last Redemption is the eighth in this award-winning series. Matt is a graduate of UC Santa Barbara and lives in San Diego.

“Matt Coyle is one of the finest PI authors in the business. Last Redemption proves it. Superb!” —Bruce Robert Coffin, award-winning author of the Detective Byron Mysteries

“Last Redemption deserves more stars than has the Hollywood Walk of Fame.” —Bookreporter

“Last Redemption is a thrilling ride and lives up to the high bar that Matt Coyle has already set for himself.” —Deadly Pleasures Mystery Magazine