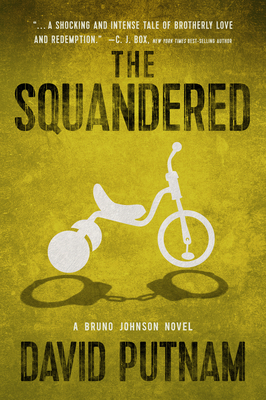 This is book number 3 in the Bruno Johnson Series series.

The Squandered propels Bruno into an emotionally charged high-speed chase as he and Marie leave their rescued kids in Costa Rica and risk returning to the U.S. at the request of Bruno’s terminally ill father. Bruno’s estranged and incarcerated brother needs Bruno to help rescue his abducted young grandchildren, children that Bruno hadn’t known existed.

Bruno cannot deny his father, and Marie will not let Bruno go alone. As fugitives, they return to the U.S. to face not only imminent arrest, but also to confront ruthless kidnappers, drug dealers, and government agents who will stop at nothing to keep a secret from the past buried forever.

Glimpses of Bruno’s law enforcement past shed light on the mayhem they encounter once they are discovered in L.A. It seems that Bruno’s brother, Noble, has inadvertently kicked a hornet’s nest of criminals, both in and out of prison, and among various law enforcement agencies looking to find a long missing load of nine million dollars’ worth of cocaine. And Noble’s grandchildren are caught in the crosshairs.

The chase, the brutality, and the emotional stress tests Bruno and Marie’s relationship and forces them to define family—what’s okay to forgive, and what should never be forgotten. Armed with a new moral code, will they live long enough to put it into practice?

During his career in law enforcement, David Putnam has done it all: worked in narcotics, violent crimes, criminal intelligence, hostage rescue, SWAT, and internal affairs, to name just a few. He is the recipient of many awards and commendations for heroism. The Squandered is his third Bruno Johnson novel, following the best-selling and critically acclaimed The Disposables and The Replacements.Putnam lives in Southern California with his wife, Mary.

“Putnam puts his years of law enforcement experience to good use in The Squandered, a shocking and intense tale of brotherly love and redemption realized in the midst of moral decay. It’s a raw and gritty story I couldn’t put down.”—C.J. Box, New York Times best-selling author

“. . . so well crafted, readers will zip right through this poignant crime thriller.”—Publishers Weekly

“David Putnam delivers again what we have come to expect from this hard-hitting ex-cop: non-stop adrenaline-filled action; a plot filled with twists and turns and reversals; characters with both quirks and heart; and a deep understanding of the world those characters inhabit. Read him for the thrill ride, but you will find yourself dwelling on the moral questions he raises long after you're done. Caution: this series could be addicting.”—Michael Sears, Shamus and Silver Falchion award-winning author

“Putnam knows his territory, and he knows his people – on both sides of the law. The Squandered blends the adrenaline rush of a high-speed pursuit with a clear-eyed look at the gray area between good and evil, and the hard choices people are sometimes forced to make.”—Wallace Stroby, award-winning journalist and author

“Bad Boy Bruno Johnson comes out of hiding to battle a vicious biker gang that threaten his family. Bring an oxygen tank with you when you read The Squandered because you'll be holding your breath the whole time. Unrelenting action with more twists than a sidewinder trail. A lightening read!”—Matt Coyle, Anthony Award-winning author