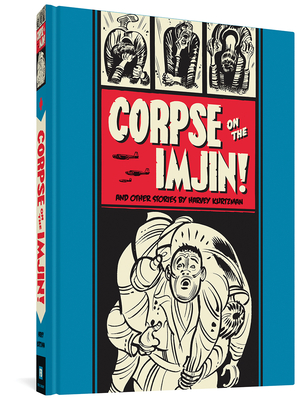 EC reprint series kicks off with war-story masterpieces from the legendary Harvey Kurtzman.

The creation of MAD would have been enough to cement Harvey Kurtzman’s reputation as one of the titans of American comics, but Kurtzman also created two other comics landmarks: the scrupulously-researched and superbly-crafted war comics Two-Fisted Tales and Frontline Combat. Here were finally war comics without heroic, cigar-chomping sergeants, wisecracking privates from Brooklyn, or cartoon Nazis and “Japs” to be mowed down by the Yank heroes, but an unflinching look at the horror and madness of combat throughout history.

Kurtzman employed some of the finest of the EC artists including Jack Davis ,John Severin, and Wallace Wood, but his vision came through clearest in the dozen or so stories he both wrote and drew himself, in his uniquely bold, slashing, cartoony-but-dead-serious style (“Stonewall Jackson,” “Iwo Jima,” “Rubble,” “Big ‘If ’,” and Kurtzman’s own favorite, “Air Burst”) — as well as his vividly colored, narratively-dense covers, all 23 of which are reproduced here in full color in a special portfolio.

“Corpse on the Imjin!” is rounded off with a dozen or so stories written and laid out by Kurtzman and drawn by “short-timers,” i.e. cartoonists whose contributions to his war books only comprised a story or two — including such giants as designer extraordinaire Alex Toth, Marvel comics stalwart Gene Colan, and a pre-Sgt. Rock Joe Kubert... and such unexpected guests as “The Lighter Side of...” MAD artist Dave Berg and DC comics veteran Ric Estrada — as well as a rarity: a story by EC regular John Severin inked by Kurtzman.

Like every book in the Fantagraphics EC line, “Corpse on the Imjin!” will feature extensive essays and notes on these classic stories by EC experts — but Kurtzman’s stories, as vital, powerful, affecting, and even, yes, modern today as when they were created 60 years ago, are what makes this collection a must-have for any comics reader.

In addition to his pioneering work on the “serious” EC war comics, Harvey Kurtzman (1924-1993) created the all-time greatest satirical comic (with Mad), the most widely-read adult comic strip (with “Little Annie Fanny” in Playboy), and one of the earliest graphic novels (with the 1959 The Jungle Book).

Gary Groth is the co-founder of The Comics Journal and Fantagraphics Books. He lives in Seattle.