City of Mirrors: A Novel (Paperback) 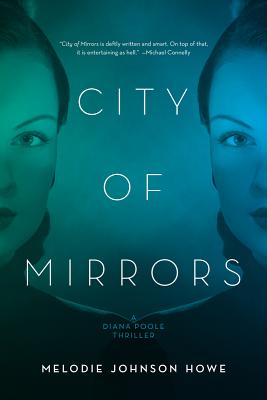 By Melodie Johnson-Howe
Unavailable to Order
Out of Print

"City of Mirrors is deftly written and smart. On top of that, it is entertaining as hell." - Michael Connelly

Running out of money, Diana Poole is forced to go back to the only work she knows: acting. Her much-loved husband and movie-star mother have died, and now Diana is over thirty-five. In Hollywood that means she might as well be dead. Still, a few key people remember her talent, and she lands a role in a new movie.

But an actress should never get her hopes up, especially when she discovers the female lead's murdered body. Raised in her mother's shadow, Diana knows people in "the business" will go to dangerous lengths to protect their images.

When her own life and career are threatened, Diana decides to fight back and find the killer. But unmasking the surprising murderer isn't that easy, especially when she uncovers what's real - and unreal - in her own life.

Melodie Johnson-Howe is the author of three novels, The Mother Shadow, nominated for an Edgar award; Beauty Dies; and City of Mirrors. After a career in movies and television, she quit acting to write novels. She lives in Santa Barbara with her husband.

This is a compelling view of Hollywood’s dark side by former actress Howe as seen through the eyes of insider Diana, whose future exploits bear watching.

The moral decay of the movie business has rarely been so deftly portrayed as in City of Mirrors. Jet-propelled narrative drive, non-stop action, a dark and twisting plot, and a mega-tough yet sympathetic heroine make this one impossible to put down.