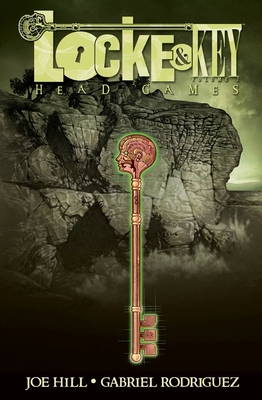 This is book number 2 in the Locke & Key series.

Now a Netflix Original Series! New York Times-bestselling writer Joe Hill and artist Gabriel Rodriguez, the creators behind the acclaimed Locke & Key: Welcome to Lovecraft, return with the next chapter in the ongoing tale, Head Games.

The three Locke children—survivors of a horrific home invasion that claimed their father—have just begun to rebuild their lives when little Bode discovers a key with incredible power. Q: What if overcoming your fears, mastering any skill, learning any art was as simple as turning a key? A: It could cost you your life—especially if Dodge, the malevolent creature who is the Locke family's sworn enemy, gets his hands on it.

"A helluva comic... Locke & Key: Head Games picks up where Joe Hill and Gabriel Rodriguez's last series left off... [and] you will not find a better single blend of stoytelling and artwork..." — Blair Butler, G4

"Not only has Joe Hill kept the Locke & Key franchise fresh throughout this second series, but at its end, Head Games actually trumps the initial stories in just about every way... Gabriel Rodriguez contnues to assert himself as one of the prmiere horror artists in the industry." — IGN

"With each and every issue this series just keeps adding layers to a story that is already full of charm and perplexity and character—not to mention gorgeous art—that easily puts it in a league of its own... if only comics could so completely transport their readers as readily and deftly as Hill and company with this book..." — Ain't It Cool News