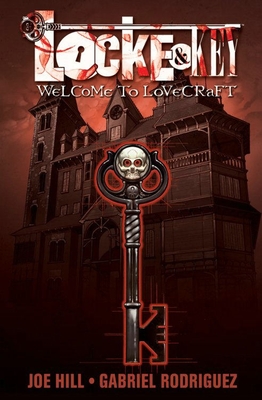 This is book number 1 in the Locke & Key series.

The fusion of horror and fantasy is something that Joe Hill and Gabriel Rodriguez have mastered through this comic. As the Locke children are grieving their late father, the youngest sibling starts to discover magical keys in their father's childhood home.However, as these keys start to reveal horrific secrets long kept buried, the children slowly begin to piece together their father's dark past. If you are discovering this comic through the Netflix show, keep in mind that the comic is very different. However, reading it is a great way to understand the deeper lore of the keys, and it offers a much scarier take. Perfect for horror lovers

Now a Netflix original series! Named a "modern masterpiece" by The A.V. Club, Locke & Key tells a sprawling tale of magic and family, legacy and grief, good and evil. Acclaimed suspense novelist and New York Times best-selling author Joe Hill (The Fireman, Heart-Shaped Box) has created a gripping story of dark fantasy and wonder—with astounding artwork from Gabriel Rodriguez—that, like the doors of Keyhouse, will transform all who open it. The epic begins here: Welcome to Lovecraft.

Following their father's gruesome murder in a violent home invasion, the Locke children return to his childhood home of Keyhouse in secluded Lovecraft, Massachusetts. Their mother, Nina, is too trapped in her grief—and a wine bottle—to notice that all in Keyhouse is not what it seems: too many locked doors, too many unanswered questions. Older kids Tyler and Kinsey aren't much better. But not youngest son Bode, who quickly finds a new friend living in an empty well and a new toy, a key, that offers hours of spirited entertainment. But again, all at Keyhouse is not what it seems, and not all doors are meant to be opened. Soon, horrors old and new, real and imagined, will come ravening after the Lockes and the secrets their family holds.

"It's great! ...The art here by Gabriel Rodriguez is some of the finest stuff in comics today... The team of Hill and Rodriguez is top notch!" — Blair Butler, Fresh Ink

"In a year of auspicious comics debuts, Joe Hill turned in one of the few comics that truly came from a different place. Written with skill that makes me jealous, courage that makes me smile, and honesty and brutality that makes me want to see what comes next. Okay, I'm officially a fan." — Ed Brubaker