The Boy at the End of the World (Hardcover) 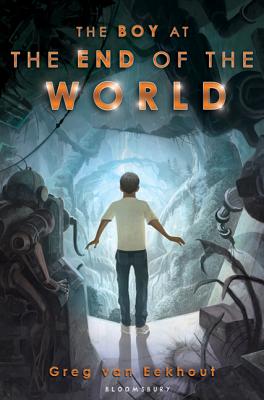 By Greg Van Eekhout
Unavailable to Order
Out of Print

Fisher is the last boy on earth-and things are not looking good for the human race. Only Fisher made it out alive after the carefully crafted survival bunker where Fisher and dozens of other humans had been sleeping was destroyed.

Luckily, Fisher is not totally alone. He meets a broken robot he names Click, whose programmed purpose-to help Fisher continue existing-makes it act an awful lot like an overprotective parent. Together, Fisher and Click uncover evidence that there may be a second survival bunker far to the west. In prose that skips from hilarious to touching and back in a heartbeat, Greg van Eekhout brings us a thrilling story of survival that becomes a journey to a new hope-if Fisher can continue existing long enough to get there.

GREG VAN EEKHOUT is the author of the middle-grade novel Kid vs. Squid and the adult novel Norse Code. His last name is pronounced like this: van, as in the thing you drive, eek, as in, Eek, killer robots are stomping the rutabagas! and hout, like out with an h in front of it. The emphasis is on Eek: van EEKhout.www.writingandsnacks.com

"Fisher's survivalist journey through the ruins of our future is both funny and affecting, full of transformed creatures, broken cities, and mad robots. Amid desperate escapes, explosive battles and piles of mammoth dung, The Boy at the End of the World, also manages to ask interesting questions about our place in the world, and where we're headed as a species." —Paolo Bacigalupi, Printz Award winning author of Ship Breaker

"Greg van Eekhout's The Boy at the End of the World is both moving and full of adventure. This remarkable survival story will change the way readers think about themselves and the world they live in." —Sarah Prineas, author of The Magic Thief "Greg van Eekhout's The Boy at the End of the World is wholly engaging and action packed. It is a compelling journey story filled with unusual friendships and a vision of the future that doesn't shy away from eco-heavy messages and themes as it plunges the reader ever forward toward a riveting, cinematic end." —Ingrid Law, Newbery Honor author of Savvy "The characters are well developed and the moral dilemmas are sound. This is an excellent beginning for science fiction readers and the study of dystopian society. Recommended." — Library Media Connection "The author of Kid vs. Squid (2010) repeats with another quirky, high-stakes adventure hung about with oddball ideas and life-threatening hazards... Van Eekhout moves his tale along briskly to a violent, suspenseful climax… A pleaser for readers who prefer their sf livened up with unpredictable elements and emotional complexity." —Booklist "Part speculative fiction, part cinematic survival adventure, the novel features a brisk pace and clever and snappy dialogue. The real, scary possibility of human destruction of our own environment is tempered by this diverting tale of the possibilities of continued existence and the meaning of hope, friendship and community." —Kirkus Reviews