The Straits of Galahesh: The Second Volume of The Lays of Anuskaya (Paperback) 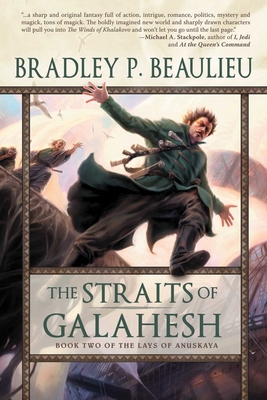 This is book number 2 in the Lays of Anuskaya series.

West of the Grand Duchy of Anuskaya lies the Empire of Yrstanla, the Motherland. The Empire has lived at peace with Anuskaya for generations, but with political turmoil brewing and the wasting disease still rampant, opportunists from the mainland have begun to set their sights on the Grand Duchy, seeking to expand their empire.

Five years have passed since Prince Nikandr, heir to the scepter of Khalakovo, was tasked with finding Nasim, the child prodigy behind a deadly summoning that led to a grand clash between the armies of man and elder elemental spirits. Today, that boy has grown into a young man driven to understand his past — and the darkness from which Nikandr awakened him. Nikandr’s lover, Atiana, has become a Matra, casting her spirit forth to explore, influence, and protect the Grand Duchy. But when the Al-Aqim, long thought lost to the past, return to the islands and threaten to bring about indaraqiram — a change that means certain destruction for both the Landed and the Landless — bitter enemies must become allies and stand against their horrific plans.

From Bradley P. Beaulieu, author of the critically acclaimed debut novel The Winds of Khalakovo, comes Book Two of The Lays of Anuskaya, The Straits of Galahesh.

Bradley Beaulieu began writing his first fantasy novel in college, and has since dedicated himself to the craft. His previous work has been voted a Million Writers Award notable story and was the winner of the Writer of the Future 20 contest in 2004. The Flames of Shadam Khoreh is his third book in the Lays of Anuskaya trilogy, and Beaulieu lives in Racine, Wisconsin, with his wife and two children.