The Secret Legacy of Jesus: The Judaic Teachings That Passed from James the Just to the Founding Fathers (Paperback) 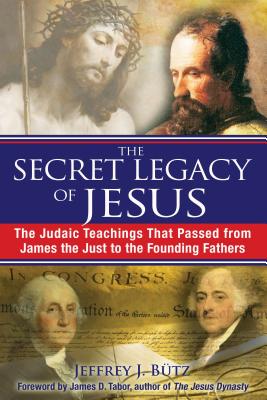 • Reveals for the first time the hidden link that connects James the Brother, Islam, the Cathars, the Knights Templar, and Freemasonry

With the success of Paul’s desire to impose his vision for the Church, the true teachings of Jesus--as preserved by his family and disciples--were forced into hiding. This clandestine movement was evidenced by such early groups as the Nazarenes, Ebionites, and Elkesaites but is generally thought to have died out when the Church of Paul branded these groups as heretics. However, despite the ongoing persecution by the Roman Catholic orthodoxy, this underground Jewish strain of Christianity was able to survive and resist incorporation into its more powerful rival. Jeffrey Bütz, author of The Brother of Jesus and the Lost Teachings of Christianity, reveals for the first time the hidden theological link that connects James the Brother of Jesus and the Ebionites with the religion of Islam, the Cathars, the Knights Templar, and Freemasonry.

In The Secret Legacy of Jesus, Bütz demonstrates how this centuries-old underground stream of Christ’s original teachings remained alive and how it surfaced again in Colonial America, where the Founding Fathers used Masonic principles rooted in Jewish Christian teachings to establish what they believed would be a “New Jerusalem.” With the rise of a fundamentalist Christianity, this potent spiritual vision was lost, but Bütz contends it can be recovered and used to bring about the reconciliation of Christians, Jews, and Muslims throughout the world.

“Bütz . . . is eminently readable and accessible to nonscholars while being thorough in [his] research. [He] raises the specter of a revisioned Christianity and challenges readers to rethink the nature of both orthodoxy and heresy.”
— Publishers Weekly

“The Secret Legacy of Jesus is masterful, nothing less than the new definitive work on Jewish Christianity. It’s the whole story of what happened to the religion of Jesus, in one place. Immensely readable, this insightful book will challenge those who continue to believe that Paul’s Gentile Christ Movement was the only form of early Christianity.”
— Barrie Wilson, professor of Religious Studies, York University, Toronto, and author of How Jesus Bec

“Many books are informative; this remarkable book is also important. Rev. Bütz traces an ‘underground stream’ of Jewish-Christian (Ebionite) affirmation of the humanity of Jesus--from his family and original apostles through nearly two millennia, culminating in Freemasonic traditions of the Founding Fathers who wrote the Constitution of the United States.”
— Margaret Starbird, author of Magdalene’s Lost Legacy and Woman with the Alabaster Jar

“I just read Jeffrey Bütz’s latest brilliant work and am more convinced than ever that America is the New Jerusalem. Bütz lays out clearly and convincingly that the original teachings of Christ, as handed down by Jesus’s brother James, impacted Freemasonry. When the Freemasons threw their support behind Thomas Jefferson, Benjamin Franklin, and others, they were able to manifest the greatest expression of a democratic republic this planet has ever seen: the U.S. Constitution. This book is superb!”
— Robert R. Hieronimus, Ph.D., author of Founding Fathers, Secret Societies and United Symbolism of Am

“The Secret Legacy of Jesus is a major contribution to the study of the historical Jesus. Bütz manages to deal with extremely complex phenomena yet retain an easy reading style. Such an accomplishment is made even more challenging by the scarcity of facts surrounding the Desposyni, which makes this book as much a mystery solver as a historical document. One of the great joys of reading this book is that Bütz gives us a sweeping panorama stretching across two millennia. This is a must read for anyone interested in Christianity.”
— Dr. James Gardner, author of Jesus Who? Myth vs. Reality in the Search for the Historical Jesus and

“What a pleasure it was to read The Secret Legacy of Jesus! It is well written, unconventional, conversational, and engaging. His tone and relaxed writing style convey the very tolerance and universalism that he sees in early Christianity. This is an important addition to the growing body of literature on early Jewish Christianity, a subject that has been heretofore largely ignored.”
— Keith Akers, author of The Lost Religion of Jesus

"While evidence for an unbroken tradition is tenuous at best, Bütz's book provocatively reminds readers of the persistence of non- and even anti-Pauline types of Christianity; for spiritual seekers, scholars, and open-minded Christians."
— Library Journal, Jan 2010

" . . . a pick for any spirituality collection including secret societies and Christian history."
— The Midwest Book Review, Apr 2010