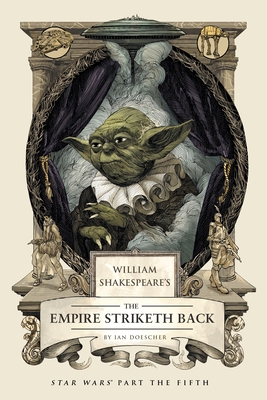 Experience the Star Wars saga reimagined as an Elizabethan drama penned by William Shakespeare himself, complete with authentic meter and verse, and theatrical monologues and dialogue by everyone from Yoda to a hungry wampa.

Many a fortnight have passed since the destruction of the Death Star. Young Luke Skywalker and his friends have taken refuge on the ice planet of Hoth, where the evil Darth Vader has hatched a cold-blooded plan to capture them. Only with the help of a little green Jedi Master—and a swaggering rascal named Lando Calrissian—can our heroes escape the Empire's wrath. And only then will Lord Vader learn how sharper than a tauntaun's tooth it is to have a Jedi child.

Authentic meter, stage directions, reimagined movie scenes and dialogue, and hidden Easter eggs throughout will entertain and impress fans of Star Wars and Shakespeare alike. Every scene and character from the film appears in the play, along with twenty woodcut-style illustrations that depict an Elizabethan version of the Star Wars galaxy.What light through Yoda's window breaks? Methinks you'll find out in the pages of The Empire Striketh Back!

Ian Doescher is the New York Times best-selling author of the William Shakespeare’s Star Wars® series, the Pop Shakespeare series, and MacTrump. He has written for Marvel Comics and is a contributing author to the story collection Star Wars: From a Certain Point of View. He lives in Portland, Oregon, with his family. Visit him at IanDoescher.com.

“Good luck getting to the end without rolling off your chairs. This book is a hoot.”—McClatchy Tribune

“So what are you waiting for? Get thee once more to a galaxy far, far away.”—Paste Magazine

“An inspired illustrated mashup that retells the space adventure in artful iambic pentameter and answers the question: What light through Yoda's window breaks?”—Tampa Bay Tribune

“This is a must for any fan of ‘Star Wars’.”—The Citizen

“Reverent, clever and a novel way for fans to re-immerse themselves in their beloved franchise.”—New York Times, on the series

“A quirky addition to the genre-busting canon.”—Entertainment Weekly, on William Shakespeare’s Star Wars

“A great gift for every geek you know, no matter what their passion.”—Huffington Post, on William Shakespeare’s Star Wars

“The writing’s quite good; elaborate Elizabethan woodcuts. . .are just icing on the cake.”—The Wall Street Journal, on William Shakespeare’s The Tragedy of the Sith’s Revenge

“At last, the mother of all mashups is upon us.”—CNET.com, on William Shakespeare’s Star Wars

“Each page proves that the English language is a playground, and Ian Doescher uses every opportunity to the fullest.”—Sweety High, on William Shakespeare’s Jedi the Last

“The book is so brilliant you’ll wonder why someone didn’t think of it sooner.”—Paste Magazine, on William Shakespeare’s Star Wars

“As Shakespeare would say, you might think, this be madness, yet there is a method in ’t.”—Newsday, on William Shakespeare’s Star Wars