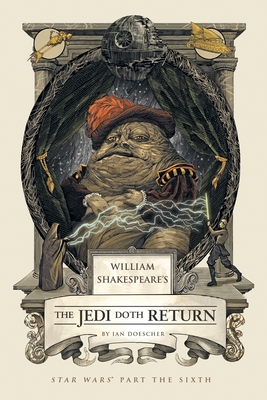 Experience the Star Wars saga reimagined as an Elizabethan drama penned by William Shakespeare himself, complete with authentic meter and verse, and theatrical monologues and dialogue by everyone from C3PO to Admiral Ackbar.

Prithee, attend the tale so far: Han Solo entombed in carbonite, the princess taken captive, the Rebel Alliance besieged, and Jabba the Hutt engorged. Alack! Now Luke Skywalker and his Rebel band must seek fresh allies in their quest to thwart construction of a new Imperial Death Star. But whom can they trust to fight by their side in the great battle to come? Cry “Ewok” and let slip the dogs of war!

Authentic meter, stage directions, reimagined movie scenes and dialogue, and hidden Easter eggs throughout will entertain and impress fans of Star Wars and Shakespeare alike. Every scene and character from the film appears in the play, along with twenty woodcut-style illustrations that depict an Elizabethan version of the Star Wars galaxy. Frozen heroes! Furry creatures! Family secrets revealed! And a lightsaber duel to decide the fate of the Empire. In troth, William Shakespeare’s The Jedi Doth Return has it all!

Ian Doescher is the New York Times best-selling author of William Shakespeare's Star Wars® and the Pop Shakespeare series. He lives in Portland, Oregon, with his family. Visit him at IanDoescher.com.

“If you love Star Wars and Shakespeare, this book is the pinnacle of perfection.”—Yoda News

“For those who enjoyed Doescher's first two retellings, rejoice, for the merriment plays on.”—The Free Lance-Star

“A great gift for every geek you know, no matter what their passion.”—Huffington Post

“The book is so brilliant you’ll wonder why someone didn’t think of it sooner.”—Paste Magazine

“At last, the mother of all mashups is upon us."—CNET.com

“William Shakespeare’s Star Wars is Exactly What You Need For Your Next Geeky Houseparty.”—Tor.com

“As Shakespeare would say, you might think, this be madness, yet there is a method in 't.”—Newsday

Praise for William Shakespeare’s The Empire Striketh Back
“Enormous fun.”—AVClub.com

“Good luck getting to the end without rolling off your chairs. This book is a hoot.”—McClatchy Tribune

“So what are you waiting for? Get thee once more to a galaxy far, far away.”—Paste Magazine

“An inspired illustrated mashup that retells the space adventure in artful iambic pentameter and answers the question: What light through Yoda's window breaks?”—Tampa Bay Tribune

“This is a must for any fan of ‘Star Wars’.”—The Citizen