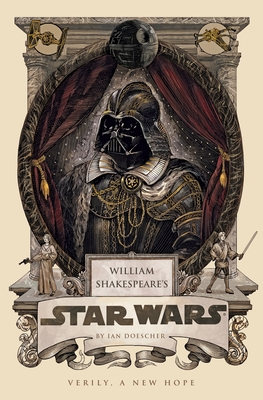 Experience the Star Wars saga reimagined as an Elizabethan drama penned by William Shakespeare himself, complete with authentic meter and verse, and theatrical monologues and dialogue by everyone from Darth Vader to R2D2.

Return once more to a galaxy far, far away with this sublime retelling of George Lucas’s epic Star Wars in the style of the immortal Bard of Avon. The saga of a wise (Jedi) knight and an evil (Sith) lord, of a beautiful princess held captive and a young hero coming of age, Star Wars abounds with all the valor and villainy of Shakespeare’s greatest plays.

Authentic meter, stage directions, reimagined movie scenes and dialogue, and hidden Easter eggs throughout will entertain and impress fans of Star Wars and Shakespeare alike. Every scene and character from the film appears in the play, along with twenty woodcut-style illustrations that depict an Elizabethan version of the Star Wars galaxy. Zounds! This is the book you’re looking for.

Ian Doescher is the New York Times best-selling author of the William Shakespeare’s Star Wars® series, the Pop Shakespeare series, and MacTrump. He has written for Marvel Comics and is a contributing author to the story collection Star Wars: From a Certain Point of View. He lives in Portland, Oregon, with his family. Visit him at IanDoescher.com.

“A quirky addition to the genre-busting canon.”—Entertainment Weekly

“A great gift for every geek you know, no matter what their passion.”—Huffington Post

“The book is so brilliant you’ll wonder why someone didn’t think of it sooner.”—Paste Magazine

“At last, the mother of all mashups is upon us."—CNET.com

“William Shakespeare’s Star Wars is Exactly What You Need For Your Next Geeky Houseparty.”—Tor.com

“Doescher’s pseudo-Shakespearean language is absolutely dead-on; this is one of the best-written Shakespeare parodies created for this audience and it is absolutely laugh-out-loud funny for those familiar with both The Bard and Star Wars.”—School Library Journal

“If you are looking for a neat way to get acquainted with Shakespeare or you are a teacher whose students are having a rough time accessing the genius of the Bard of Avon, I highly recommend you give William Shakespeare’s Star Wars a try!”—GeekMom

“As Shakespeare would say, you might think, this be madness, yet there is a method in 't.”—Newsday

“What Doescher made is delicious.”—Charleston City Paper

“This is a great read. Author Ian Doescher may not have bested Shakespeare, but he’s certainly one-upped Lucas.”—Asbury Park Press

“Is it all a great, geeky, inter-galactic goblet of literary fun? Verily!” —AmericanProfile.com

“The Bard at his finest, with all the depth of character, insightful soliloquies, and clever wordplay that we’ve come to expect from the Master. For those who wish to read the Star Wars legend in the original Elizabethan, this is the book for you.”—Timothy Zahn, New York Times bestselling author of Scoundrels

“Well-read geeks have breathlessly waited
For what Ian Doescher hath created
This book's cover is the door
To a Star Wars ne'er seen before”
—Daniel Wallace, New York Times best-selling author of Star Wars: The New Essential Guide to Characters

“I'm delighted to have William Shakespeare's Star Wars, and have read it with great pleasure. What a fine idea, to set this in the world of Luke Skywalker and R2-D2 C-3PO and Darth Vader! A period of civil war, rebels, the Galactic Empire, the death star. A star-crossed galaxy! Ian Doescher does iambic pentameter well. This is a hoot!”—David Bevington, Phyllis Fay Horton Distinguished Service Professor Emeritus in the Humanities, University of Chicago and co-editor of The Bantam Shakespeare series

“Whether your tastes run to Alderaan or Avon, this reimagining of Star Wars overflows with heart and wit.”—Jason Fry, author of Star Wars: The Essential Guide to Warfare

“An elegant translation for a more civilized age. Let's face it—if you love Shakespeare or Star Wars half as much as I do, you've already bought this.”—Adam Bertocci, author of Two Gentlemen of Lebowski, writer-director of Brooklyn Force and Run Leia Run, and moderator of TheForce.net

“Zounds, the Forsooth is strong in this one!  Two of the most creative minds in the universe collide with spectacular, hilarious and surprisingly touching insight into the original classic.  This truly is Star Wars as you like it.”—Joe Schreiber, author of Star Wars: Death Troopers and Lenny Cyrus, School Virus