Nine for the Devil (John #9) (Paperback) 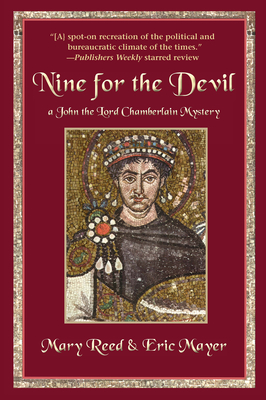 The year is 548 and Empress Theodora is dead. Emperor Justinian suspects murder and orders John, his Lord Chamberlain, to find her killer or suffer the consequences. Many aristocrats at the imperial court had reason to want Theodora dead. General Artabanes, Justinian's cousin Germanus, and Antonina and her husband General Belisarius have suffered at Theodora's hands. Might Gaius, palace physician, have tampered with Theodora's medication? Even Pope Vigilius, detained in the capital by a religious controversy, is not above suspicion.

Meanwhile, John must also grapple with domestic upheavals. His daughter is about to give birth and his aging servant Peter is dying. Will John be able to serve justice, his loved ones, and the emperor?

The husband and wife team of Mary Reed and Eric Mayer published several short stories about John, Lord Chamberlain to Emperor Justinian, in mystery anthologies and in Ellery Queen Mystery Magazine prior to 1999's highly acclaimed first full length novel, One for Sorrow. Entries in the series have been honored by a Best Mystery Glyph Award, an honorable mention in the Glyph Best Book category, and was a finalist for the IPPY Best Mystery Award (Two for Joy), nominations for the Bruce Alexander Memorial Historical Mystery Award (Four for a Boy and Five for Silver), and a Glyph Award for Best Book Series (Five for Silver). The American Library Association's Booklist Magazine named the Lord Chamberlain novels one of its four Best Little Known Series.Mary Reed & Eric Mayer also write under Eric Reed.

"Subtle, well-drawn characters, from the ascetic John to the capricious and enigmatic Justinian; deft descriptive detail revealing life in the late Roman Empire; and sharp dialogue make this another winner in this outstanding historical series" —Publishers Weekly starred review of Eight for Eternity

"The story is fast paced, the tensions between characters well portrayed; the ending leaves the reader clamoring for more. Those interested in Istanbul's history may also enjoy series set in Ottoman Turkey by Jason Goodwin (The Janissary Tree) and Jenny White (The Sultan's Seal)." —Publishers Weekly starred review for Seven for a Secret