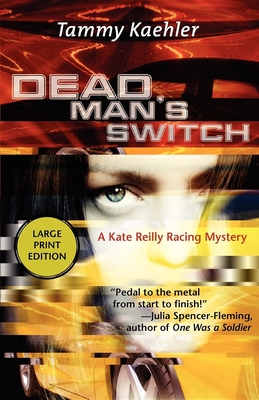 By Tammy Kaehler
Unavailable to Order
Out of Print

"Kaehler's clear explanations of technical jargon make the racing world come alive. An engaging debut; I can't wait to see where Kate and the crew go next." --Library Journal

Aspiring race car driver Kate Reilly goes looking for a full-time ride in the American Le Mans Series--and stumbles over a dead driver. When she takes that driver's job just hours later, she also takes pole position on the list of suspects in his murder. Suddenly she's in the hot seat with little time to clear her name and get ready to race a Corvette at Lime Rock Park.

Amid suspicion, Kate buckles down, quickly getting to know the race car and team, bumping into plenty of suspects who might have committed murder. Clues fly at her as fast as the turns on the track, including a cryptic list of blackmail victims, unexplainable car performance at racing speed, a jealous husband with an adulterous wife, and drivers and crew who are openly happy her predecessor is dead. Kate finds exhilaration and hazards exist on- and off-track as she throttles up both the Corvette's V8 and a murder investigation.

The green-flag countdown ticks away, and Kate must decide who she can trust to help probe alibis, untangle rumors of team breakups and personal betrayals, and determine whose drive to win also constitutes a willingness to kill. Because what's at stake in Kate's race to the truth is her career ... only by uncovering a murderer can Kate restore her reputation and prove she belongs in the racing world.

Praise for the Kate Reilly Mysteries:
"Read this book--but buckle in first. Believe me, you're in for a bumpy ride." --WILLIAM KENT KRUEGER, New York Times bestselling author for Braking Points
"This series always leaves me wanting more, so I cannot wait to keep reading and see what's next on the horizon for my fellow female racing driver " --PIPPA MANN, IndyCar driver for Avoidable Contact
"As usual, Kaehler combines a credible group of suspects with some detailed racing lore. Even readers who don't care about cars may well be hooked by the feminist angle." --Kirkus Reviews for Kiss the Bricks