Samskara: A Rite for a Dead Man (Paperback) 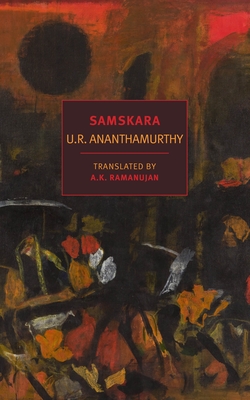 Samskara is one of the acknowledged masterpieces of modern world literature, a book to set beside Chinua Achebe’s Things Fall Apart and Tayeb Salih’s Season of Migration to the North. Taking its name from a Sanskrit word that means “rite of passage” but also “moment of recognition,” it begins when Naranappa, an inhabitant of a small south Indian town and a renegade Brahmin who has scandalously flouted the rules of caste and purity for years, eating meat, drinking alcohol, marrying beneath him, mocking God, unexpectedly falls ill and dies. The question of whether he should be buried as a Brahmin divides the other Brahmins in the village. For an answer they turn to Praneshacharyah, the most devout and respected member of their community, an ascetic who also tends religiously to his invalid wife.

Praneshacharyah finds himself unable to provide the answer, though an answer is urgently needed since as he wonders and the villagers wait and the body festers, more and more people are falling sick and dying. But when Praneshacharyah goes to the temple to seek a sign from God, he discovers something else entirely—unless that something else is also God.

U.R. Ananthamurthy (1932–2014) was a novelist, short-story writer, poet, playwright, and literary critic. He was one of India’s most celebrated modern writers, a recipient of the Jnanpith Award (India’s foremost literary prize), and an important representative of the New Movement in Kannada-language literature.

A.K. Ramanujan (1929–1993) was born Attipat Krishnaswami Ramanujan in Mysore, India. He is a poet in English and Kannada, a translator from Kannada and Tamil, as well as a scholar, folklorist, philologist, playwright, and essayist. NYRB Poets publishes The Interior Landscape, an anthology of classical Tamil poems translated by Ramanujan.

“[Samskara] contains a plot of Sophoclean intensity that with the passing of the years seems to have gathered ever more revelatory power…It’s a startling story, one as provocative for its time and place as those of Cervantes, Sterne and Diderot must have been in theirs.” —Chandrahas Choudhury, The Wall Street Journal

“Samskara is an effective tale of a community choked by unsustainable tradition. Ananthamurthy offers fine portraits of a variety of characters as they struggle between natural urges and societal expectations, and has crafted an impressive story here.” —M. A. Orthofer, The Complete Review

"NYRB Classics' reissue of this book comes at an opportune moment, as societies around the world face the dangers of religious extremism and its focus on ritual and regulation rather than humanity. U.R. Ananthamurthy, in A.K. Ramanujan's translation from the Kannada, tries to teach Indian society a lesson in this story about the trouble with prioritizing tradition over compassion." —Melissa Beck, Asymptote Journal

“Ananthamurthy’s ability to turn the world on the most unexpected pivot gives [Samskara] an enduring human dimension.” —María Helga Guðmundsdóttir, The Quarterly Conversation

"[A] richly allegorical tale...a springboard for even broader questions concerning...religious experience and the inherent tension between works and grace." —William Waldron, Education About Asia

"[Samskara] takes us closer to the Indian idea of the self." —V. S. Naipul

Ananthamurthy’s most controversial and celebrated work, Samskara, is a novel about a decaying Brahmin colony. . . . Throughout the novel, Ananthamurthy builds extraordinary tension and atmosphere. It is an India that is instantly recognizable to its Indian readers.
—Pankaj Mishra