All About H. Hatterr (Paperback) 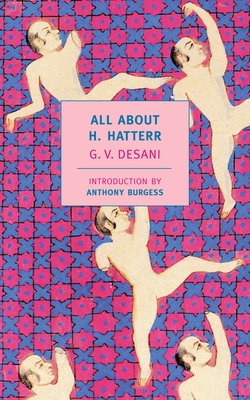 Wildly funny and wonderfully bizarre, All About H. Hatterr is one of the most perfectly eccentric and strangely absorbing works modern English has produced. H. Hatterr is the son of a European merchant officer and a lady from Penang who has been raised and educated in missionary schools in Calcutta. His story is of his search for enlightenment as, in the course of visiting seven Oriental cities, he consults with seven sages, each of whom specializes in a different aspect of “Living.” Each teacher delivers himself of a great “Generality,” each great Generality launches a new great “Adventure,” from each of which Hatter escapes not so much greatly edified as by the skin of his teeth. The book is a comic extravaganza, but as Anthony Burgess writes in his introduction, “it is the language that makes the book. . . . It is not pure English; it is like Shakespeare, Joyce, and Kipling, gloriously impure.”

G. V. Desani (1909—2001) was born Nairobi, Kenya and raised in India. In the late 1930s, and throughout the war, he was a BBC broadcaster and lectured on India. He contributed regularly to The Times of India's Illustrated Weekly and produced a weekly opinion page called "Very High and Very Low." He moved to the United States in 1970 to teach at Boston University and subsequently the University of Texas at Austin, where he was a Professor of Religion and Philosophy.

Anthony Burgess (1917–1993) was a prolific novelist, composer, librettist, essayist, semanticist, translator, and critic. He is best known for the novel A Clockwork Orange.

“In all my experience, I have not met with anything quite like it.” –T. S. Eliot

"Bless him, [Desani] does mash it up, bending orthography, stretching syntax, mixing in shards of Hindi, Hungarian, Spanish, Italian, Japanese, German and a goodly dose of balderdash, whilst tossing in references to Whitman, Shakespeare, Socrates, Freud and appeals to Kama and Laxmi as well as to Allah and Christ. Only a quasi-outsider (an Irishman, say) could have such an irreverent ear for the Anglo-Saxon tongue. But Hatterr is more readable by miles than Finnegans Wake, and a lot more fun." -Ben Ehrenreich, Los Angeles Times

“A mischievous mulligatawny that reads like a collaboration between Mrs. Malaprop and Groucho Marx…At the end you may not quite know where you’ve been, but you understand you’ve had a helluva trip.” –Newsweek

“A bizarre and delightful voice…to paraphrase would be travesty.” –Time

"The instrument of subservience became a weapon of liberation. It was the first great stroke of the decolonizing pen." –Salman Rushdie

"Now…you can marvel at one of the great verbal extravaganzas in the English (more or less) language." –The Nation

"A rewarding feast of fish and fowl, fiction and philosophy, hilarity and hope." –The New York Times

“One doesn’t explain a work like this, or attempt to describe it. You simply let the language flow like the lyrics of a Calypso song, or a subdued show of stroboscopic lights.” –The San Francisco Chronicle

“Mr. Desani is a writer of great originality, who is making a contribution…all his own.” –C. P. Snow

"Desani is undoubtedly a master in the creative use of English–puns, parodies, colloquialisms–and an accomplished artist in the invention of a new language." –World Literature Today

A “linguistic groundbreaker” –The Guardian (UK)

“G. V. Desani - whose brilliant 1940s shaggy-dog novel All About H Hatterr inspired Midnight's Children - what enchants, is a 'rigmarole English', as Hatterr would say, all its own.” –The Guardian (UK)

“A comic masterpiece…This books is one of the funniest I have read for many years…Desani’s verbal invention is indefatigable, his linguistic sources inexhaustible.”–Philip Toynbee, The Observer (UK)