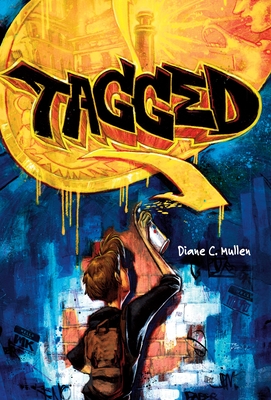 Liam is a fourteen-year-old graffiti artist living in project housing in Minneapolis with his single mother and three younger siblings. When Liam’s estranged older brother coerces him to tag a graffiti symbol for a rival gang, Liam’s life is threatened. Due to his apathetic attitude in the classroom and on the baseball field, Liam’s private-school scholarship is also threatened. His mother decides to send him to Lake Michigan for the summer to live with her best friend, Kat, a sculptor and art teacher, Liam soon delves into the work of Jean-Michel Basquiat, Pablo Picasso, and his own personal aesthetics. He’s encouraged to consider his art seriously and how it might contribute to a greater community. Having to decide between staying with Kat and returning home to his siblings who need him, Liam’s story inspires him to reinvent himself for the better.

Diane C. Mullen is a Minneapolis-based writer, filmmaker, arts educator, and mother of two grown kids. She earned her MFA in Writing for Children and Young Adults from Hamline University. Diane enjoys cycling everywhere around her beloved city; tending a plot in the Soo Line Community Garden; and working at the renowned Walker Art Center. She is the author of the middle grade novel, Tagged and the picture book, One Little lot: The 1-2-3s of an Urban Garden.

In this sensitive portrayal of a budding artist from newcomer Mullen, 14-year-old Liam O'Malley is consumed by the idea of becoming a graffiti writer. After Liam gets embroiled in a rivalry between local gangs and his grades slip, his mother sends him away from their home in the projects of Minneapolis to spend the summer with her friend Kat in tiny Lakeshore, Mich. Kat, a sculptor, provides a calm and supportive temporary home for Liam, who becomes inspired by the tranquil landscape, researches a variety of artists including Basquiat and Picasso, and begins to let go of his resentment surrounding his upbringing. Soon Liam has to decide between returning home to serve as a role model for his siblings or pursuing his dreams independently. Short chapters and clipped phrases give Liam's narrative the punchy impact of graffiti: "No sirens in two weeks. No black-and-whites driving around, either. No cops standing in stores. None walking the streets. Nothing,” Liam reflects on his new environment. A powerful story about the positive effects of change.
-Publishers Weekly

Budding graffiti artist Liam lives in the Minneapolis projects, where he struggles to resist the influence of the Irish mafia. After older brother Kieran coerces Liam to tag over a rival gang's symbol, and Liam's grades start slipping, their mother sends Liam to Lakeshore, MI, to live with her friend Kat for the summer. Liam is initially unimpressed with small-town life, but Kat gives him access to her studio and art history books. Liam finds inspiration in famous black artist and former graffitist Jean-Michel Basquiat, and combines elements from Picasso's and Basquiat's work to create his own style of street art that is accepted by the community. Mullen's main theme is the acceptance of graffiti as art, but she also explores concepts of existing versus living and artistic legacy as Liam finds his identity as an artist. Basquiat's real-life struggles give Liam much to consider. Present tense and clipped sentences provide immediacy and make this good for reluctant readers. VERDICT Recommended for those interested in street art and urban literatur, and fans of Cath Crowley's Graffiti Moon (Knopf, 2012).
-School Library Journal