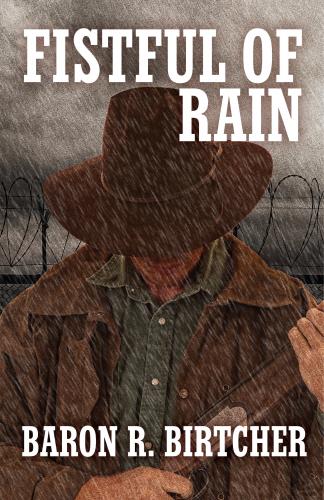 Fistful of Rain is the sequel to 2017's South California Purples. Set in 1975, it is the story of a nation, a rural county, and a small town coming to terms with turbulent change. The theft of a rancher's livestock ends in an assault that escalates into arson, and the murders of nearly a dozen people. Residents of a "hippie" commune are accused of having committed the acts that have led the small county to the brink of a range war, and of feeding the tensions between generations. Sheriff Ty Dawson, a cattle rancher himself, finds himself at the center of a battle between town residents and the "hippies" who appear to be threatening their way of life, a struggle that leads both sides to violence.

Written with equal parts elegance and grit, FISTFUL OF RAIN is a fast-paced literary thriller populated by unforgettable characters, outstanding dialogue, and a setting that will have you wishing you could live in it long after the last page has been turned.

BARON R. BIRTCHER spent a number of years as a professional musician, and founded an independent record label and management company. Critics have hailed Baron's writing as "the real deal" (Publishers Weekly), and his plots as "taut, gritty, and powerfully controlled" (Kirkus Reviews). His first two novels (Roadhouse Blues and Ruby Tuesday) are Los Angeles Times and Independent Mystery Booksellers Association best sellers, and he has been nominated for a number of literary awards, including the Nero Award (Hard Latitudes), the Claymore Awards (Rain Dogs), the Left Coast Crime Lefty Award (Angels Fall), and won the Silver Falchion Award in 2016 (Hard Latitudes). Baron currently divides his time between Portland, Oregon and Kona, Hawaii.