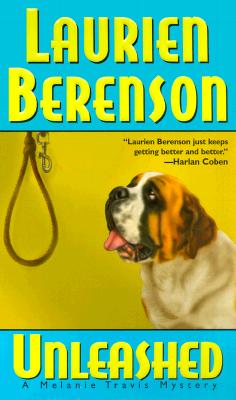 Summer means two things to Melanie Travis: a break from her teaching duties at Connecticut's elite Howard Academy and a chance to plan the perfect wedding to her fiance, Sam. She certainly doesn't need the unwelcome arrival of a dinner invitation "peace offering" from Sam's ex-wife, Sheila Vaughn. And dinner proves to be only the beginning of her problems. Sheila's new man turns out to be Brian Endicott, an old buddy-turned-enemy of Sam's. To make matters worse, Sheila announces her temporary stay in town is now permanent: she's accepted a job as co-publisher of Woof , a new gossip rag for the dog show world. But before the first issue is even out, a hotter story breaks when Sheila is found dead, strangled with a leather dog leash.
As far as Melanie's concerned, the woman should have been on a leash long ago. And it seems she isn't alone in her dislike of Sheila. Some of Woof's salacious stories threatened to expose the dirty paws of quite a few important exhibitors, and someone on Sheila's staff may have found her high-handed attitude worth silencing. Then there's the question of the life insurance policy Brian took out only days before Sheila's death.
Even more troubling to Melanie is her faltering relationship with Sam, who's hiding secrets--secrets that put him more deeply under Sheila's spell in death than in life. Now, it will take the instincts of a bloodhound to sniff out a killer who's bent on putting an end to Melanie's amateur sleuthing. . .
With "Unleashed, " Laurien Berenson has delivered her most engaging, suspenseful novel yet, full of her signature, razor-sharp wit, and fast-paced plotting that's guaranteed to have mystery lovers sitting up and begging for more of Melanie Travis.

Laurien Berenson is author of the delightful Melanie Travis canine cozy mystery series, including Jingle Bell Bark and Best in Show. She has a degree in psychology from Vassar College and has been married for almost twenty-five years. She lives in Georgia with her husband, her son, six dogs, and two Welsh ponies.