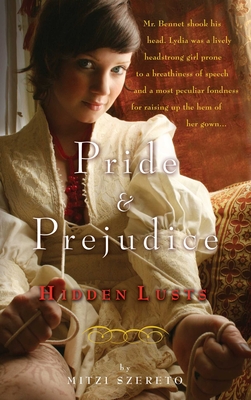 Imagine that Jane Austen had written the opening line of her satirical novel Pride and Prejudice this way: "It is a truth universally acknowledged, that a single man in possession of a good fortune, must be in want of a good romp and a good wife -- although not necessarily from the same person or from the opposite sex." In Pride and Prejudice: Hidden Lusts Mr. Darcy has never been more devilish and the seemingly chaste Elizabeth never more turned on.

The entire cast of characters from Austen's classic is here in this rewrite that goes all the way. This time Mr. Bingley and his sister both have designs on Mr. Darcy's manhood; Elizabeth's bff Charlotte marries their family's strange relation and stumbles upon a secret world of feminine relations more to her liking; and, in this telling, men are not necessarily the the only dominating sex. And of course there's some good old fashioned bodice ripping that shows no pride or prejudice and reveals hot hidden lusts in every page-turning chapter.

The author did a brilliant job of keeping to the original story but just adding very saucy and outrageous acts to make it stand out!”
Leetid’s Reading

"A sexual soap opera set back in the day of horse and carriage!"
Angel's Cove

"Readers familiar with Austen’s story will laugh (and blush) with delight as their favorite characters shed their mild mannered exteriors (and clothes) and succumb to passion."
San Francisco Book Review

"...A glorious, breathless gallop through the word-smithing antics based on Jane Austen’s most popular classic novel... Written with Szereto’s deft humor, combined with Austen’s style, the result is a great deal of fun with literature, with scandal and laughter on every page. Laugh out loud funny and arousing by turns, the pace doesn’t flag from beginning to end, every point spot on."
Portland Book Review

"This novel uses Szereto's spicy additions to explore and elaborate on the character's motivations, thus legitimately reinterpreting Jane Austen's story rather than simply jamming in the erotica... Szereto's imagination will surprise, her interpretations will intrigue..."
Rambles.NET

A fan of the original and wondering what all the characters you enjoyed might really be thinking of doing behind all those pleasantries? Give Pride and Prejudice: Hidden Lusts a read and see if you feel the same lusts they do!”- Bzzingbee

"The author, Mitzi Szereto takes all our favorite characters and puts them in the sexiest situations imaginable. Pride and Prejudice:Hidden Lusts is a mash-up similar to Pride and Prejudice and Zombies in style, except there aren’t any walking dead. But there is definitely some head."
Glamour

"A fun take on a classic."
The Reading Life

"What I really liked about Szereto's rendition is that it made sense and the insertions were much lovelier to read than the inclusion of dead, grizzled walking corpses... So as long as you don’t take your Austen too seriously, I think you will find this version an amusing and titillating treat!"
- Girls in the Stacks


"Ms. Szereto has, while honoring the original manuscript, done an excellent job in inserting those hidden lusts that could very well have been in in the minds of each and every character from the original novel."
Book Reader's Heaven

"Szereto has replaced modesty in all my favorite characters with porno-pumping desire."
College Candy

"Dear Lord, this is Pride and Prejudice, is nothing sacred? Yet I couldn't stop reading."
Lynette's Two Cents

"I was delighted with this book, anyone who loved the original classic should read Pride and Prejudice: Hidden Lusts by Mitzi Szereto!"
Readaholics Anonymous

"This novel is quite respectful of the original. Szereto’s version is hilarious and accomplished. Who is to say that Jane Austen wouldn’t have written something like this if the zeitgeist of her era had been more like that of ours? In years to come, this book will probably be regarded as a classic in its own right."
- Jean Roberta/Lizardlez


"Read it if for no other reason the novelty or seeing peoples faces when they think your all smart and reading a classic, then they look closer and see it's smut."
Getting Naughty Between the Stacks

"(Szereto's) sophisticated and humorous touch to retelling a well-known story is both absorbing and clear. I still find it impressive how well her rewrite lines up with the original novel, and look forward to her future endeavors."
Romancing the Book

"I giggled, laughed and smiled all through Pride and Prejudice: Hidden Lusts."
Another Look Book Reviews

"Put simply, "Pride and Prejudice: Hidden Lusts" is delicious smut Szereto has written us some healthy, Victorian eroticeveryone enjoys a good romp or three and lives happily ever after."
EDGE

"This is a 'must read' for anyone who loves spicy and entertaining literature. You’ll be shocked, uncomfortably aroused and planning to re-read it over and over. Bravo Ms. Szereto for bringing us all a little more culture."
Whipped Cream Reviews

"Despite the sexy times, Mitzi has kept the story faithful to how Austen would have written it, so the style of it is perfect, and flows well."
Love Romance Passion

"A refreshing change while keeping the classic storyline intact... This was my first novel by Mitzi Szereto, but definitely not my last!"
JoJo's Book Corner

"Szereto has captured Austen’s voice and tone and the essence of her characters so well that you might’ve believed that it was written by Austen herself but for all the lustful thoughts and naughty shenanigans that appear in just about every chapter!"
Pace J. Miller

"It is my personal opinion that Austen would not be rolling over in her grave over Szereto's novel. In fact, she might laugh a little."
The Dying Book Affair

"Pride and Prejudice: Hidden Lusts is historical parody, Regency romance, erotica, and satire. It's a mashup of all mashups. And most of all, it's a whole lot of fun!"
Mitzi Szereto, in an interview with Joey Pinkney

"I was extremely conscious at all times to write in the voice of Jane Austen. I wanted Pride and Prejudice: Hidden Lusts to be seamless, with nothing marring the Austen feel and story-telling style or, I should add, her use of language."
Mitzi Szereto, in an interview with The Book Rat

"Ms. Szereto brings new life to this classic. The original book seems dry by today’s standards, but this new version will keep the reader entertained from first page to last."
Sensual Reads

"Everything from the tone to the dialogue is executed superbly... This adaptation of Jane Austen is essential for collectors of literary erotica and, dare I say, is just as fine if not more riveting and sexy read than the original."
Lucrezia Magazine

"Mitzi Szereto follows the original story line but endows each of the characters with their own quirks of fancy and sexuality with no shortage of imagination."
Jane Austen Prequels and Sequels Review

"This is the book Jane Austen would have written, if only she’d had the nerve!"
Reading Lark

"Polite manners and civilized society are juxtaposed with the seething sexual undercurrents of Szereto's devising. Some ardent Jane Austen fans might scream 'Sacrilege!', but indeed others might raise their eyebrows in interest at this innovative take on a classic as I do and say 'Why not?'"
Fiendishly Bookish

"Thank God for Mitzi Szereto! Now the literary purists have someone new to go after with their pitchforks. Adding zombies to Pride and Prejudice was one thing, but SEX SEX SEX? It’s sacrilege! Raunchy, hilarious, subversive sacrilege . . . which is the best kind, of course."
Steve Hockensmith, author of Pride and Prejudice and Zombies: Dawn of the Dreadfuls

"If Jane Austen can survive the onslaught of zombies, she can surely swoon all over at the thought of Mitzi Szereto’s witty and explicit new exploration of her classic novel. A sexy hoot!"
Maxim Jakubowski

"Mitzi Szereto’s adaptation of Pride and Prejudice is a mysterious and delightful uncovering of random sexual encounters among the landed gentry. You will have a ball!"
Nick Belardes, author of Random Obsessions and illustrator of West of Here

Wicked, tongue in cheek (and elsewhere) take on Pride and Prejudicea wild, funny, sexual romp. Austen is shaken up, sexed up, and stirred up in Szereto’s naughty, laugh out loud, exuberant homage to P&P.”
Janet Mullany, author of Jane and the Damned


"Thank God for Mitzi Szereto! Now the literary purists have someone new to go after with their pitchforks. Adding zombies to Pride and Prejudice was one thing, but SEX SEX SEX? It’s sacrilege! Raunchy, hilarious, subversive sacrilege . . . which is the best kind, of course."
-Steve Hockensmith