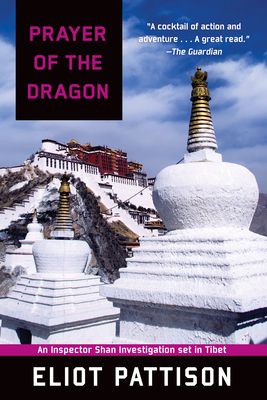 This is book number 5 in the Inspector Shan Tao Yun series.

Summoned to a remote Tibetan village from the hidden lamasery where he lives, Shan Tao Yun, formerly an investigator in Beijing, must save a comatose man from execution for two murders in which the victims’ arms have been removed. Upon arrival, he discovers that the suspect is not Tibetan but Navajo. The man has come with his niece, seeking the ancestral ties between their people and the ancient Bon. The recent murders are only part of a chain of deaths. Together with his friends, the monks Gendun and Lokesh, Shan sets out to solve the riddle of Dragon Mountain, the place “where the world begins.”

Eliot Pattison is the author of eight Inspector Shan novels, set in Tibet: The Skull Mantra (which won the Edgar Award for Best First Novel), Water Touching Stone, Bone Mountain, and Beautiful Ghosts, Prayer of the Dragon, The Lord of Death, and Mandarin Gate. This series has been translated into over twenty languages around the world. A former resident of Boston and Washington, Pattison now resides on an 18th-century farm in Pennsylvania with his wife, their three children, and an ever-expanding menagerie of animals.

Praise for the Inspector Shan Series

“Surprises and mysteries abound . . . [Prayer of the Dragon] taught me more about Tibet—modern and ancient—than I had managed to learn elsewhere over the years.”
—The Washington Post

“I’ve seldom read a novel that more effectively captures the soul of its setting, in all of its contradictions, difficulties and beauty.”
—Nancy Pearl, NPR

“Nothing I’ve read or seen about how China has systematically crushed the soul of Tibet has been as effective . . . A thriller of laudable aspirations and achievements.”
—Chicago Tribune

“A cocktail of action and adventure . . . A great read.”
—The Guardian

“Shan becomes our Don Quixote . . . Set against a background that is alternately bleak and blazingly beautiful, this is at once a top-notch thriller and a substantive look at Tibet under siege.”
—Publishers Weekly, Starred Review

“A rich and multilayered story that mirrors the complexity of the surrounding land.”
—San Francisco Chronicle