The Princess Who Flew with Dragons (Hardcover) 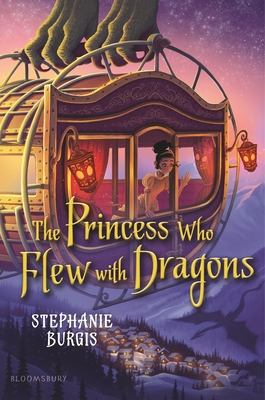 By Stephanie Burgis
$16.99
On Our Shelves Now

Perfect for fans of Shannon Hale, this girl-powered fantasy follows a smart young princess determined to save her kingdom.

Princess Sofia of Drachenburg is sick of being used for her older sister's political gains. At twelve years old, she's already been a hostage to invading dragons and promised to marry a wicked fairy. Now she's being sent to far-off Villene to play the part of a charming, diplomatic princess. Her only comfort lies in writing letters to her pen pal and best friend--Jasper, a young dragon she's never even met.

But when an accident leads to her exile from Villene, Sofia is free to wander as she pleases for the first time in her life. And when Jasper's magical sister Aventurine turns him into a human boy, Sofia thinks life can't get any better. Until . . . the legendary ice giants of the north attack, trying to reclaim the territory that was theirs centuries ago. With the dragons and royals frozen in ice, can Sofia and Jasper save their families and kingdom?

With another strong heroine and plenty of action, this is an enchanting and strong-hearted fantasy set in the same world as The Dragon with a Chocolate Heart and The Girl with the Dragon Heart.

Stephanie Burgis grew up in East Lansing, Michigan, but now lives in Wales with her husband and two sons, surrounded by mountains, castles and coffee shops. She is the author of The Girl with the Dragon Heart, The Dragon with the Chocolate Heart, the tween fantasy trilogy, Kat, Incorrigible and the adult historical fantasy title, Masks and Shadows.
www.stephanieburgis.com; @stephanieburgis

“A rousing adventure story with convincing characters and a colorful setting.” —Booklist on THE PRINCESS WHO FLEW WITH DRAGONS

“Black-presenting Silke's an entirely believable character; supporting characters are equally well-drawn, and Burgis' world is a robustly diverse one. As with the first book, the fantasy hijinks are tempered with depth for a story that's sweet but not saccharine.” —Kirkus Reviews, starred review, on THE GIRL WITH THE DRAGON HEART

“Full of secrets and supernatural beings and topped with chocolate, the book hooks fans of fantasy with a fast-paced adventure that gradually reveals its mysteries.” —BCCB on THE GIRL WITH THE DRAGON HEART

“Chocolate and dragons, together at last! Like sipping hot cocoa on a cold day, reading this book was an absolute delight. And by the end I felt like a dragon sitting on a pile of gold, knowing I'd found a treasure. Readers of all ages will love this deliciously charming adventure and its feisty dragon-transformed-into-a-girl main character, Aventurine!” —Sheila Grau, author of the Dr. Critchlore's School for Minions series on THE DRAGON WITH A CHOCOLATE HEART

“In The Dragon with a Chocolate Heart, Aventurine is turned into a girl, but inside she remains ALL dragon, every fierce, lovable inch of her. This story is a delightfully delicious blend of magic spiced with adventure and a heart as sweet and warm as molten chocolate. I completely adored this book!” —Sarah Prineas, author of THE MAGIC THIEF and Winterling series on THE DRAGON WITH A CHOCOLATE HEART

“A gloriously fresh story to be read with a steaming cup of chocolate at hand.” —Kirkus Reviews, starred review, on THE DRAGON WITH A CHOCOLATE HEART

“Aventurine's fiery spirit is immediately endearing, and a diverse cast of fully realized supporting characters fill out a fantasy world that readers will love to inhabit. Pair with chocolate for maximum enjoyment . . . will satisfy readers who hunger for feel-good tales that pack a girl-power punch, like Gail Carson Levine's Ella Enchanted or the movie Moana.” —School Library Journal on THE DRAGON WITH A CHOCOLATE HEART

“Burgis creates a feisty protagonist with a temper that suits her dragon heritage. . . . Readers will be rooting for Adventurine throughout this well-paced, colorful narrative. An appealing chapter book for young fantasy fans.” —Booklist on THE DRAGON WITH A CHOCOLATE HEART