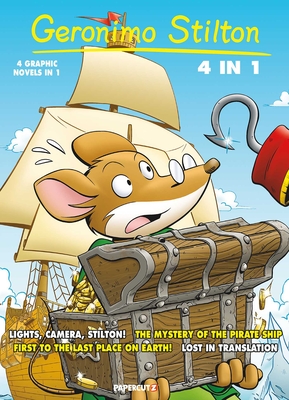 This is book number 6 in the Geronimo Stilton Graphic Novels series.

Papercutz proudly collects 4 GERONIMO STILTON graphic novels in 1! In "Lights, Camera, Stilton!," the Pirate Cats go back in time to steal the Lumiere brothers’ brilliant invention, the cinematograph, in order to go down in history as the inventors of the movies. Can Geronimo and his friends thwart the Cats’ evil plans and keep Catardone from becoming a star? Then in "The Mystery of the Pirate Ship," the Pirate Cats travel to the 18th Century to do what they do best… be pirates! So they steal an old ship sailing on the Indian Ocean to pillage the East India Company’s merchant ships! It’s up to Geronimo Stilton to travel through time, become a sailor, and stop the cats from changing history forever! Will Geronimo get his sea legs in time to save the day? Following that, in "First to the Last Place on Earth!," it’s a race to the bottom of the world when Geronimo and his friends Petunia, Benjamin, Trap and Bruce join explorer Roald Amundsen’s expedition to reach the South Pole in 1911. From Norway, through Portugal, and then straight on to the Bay of Whales in Antarctica. They’ll have to evade the sneaky sabotage of the Pirate Cats to make sure Amundsen is the very first person to reach the Pole! Finally, in "Lost in Translation," the Pirate Cats have stolen the original Rosetta Stone and replaced it with their own version, before Napoleon’s 1798 campaign in Egypt, when Lieutenant Pierre-Francois Bouchard found the Stone! Now it’s up to Geronimo and friends to find the real Stone and give it back to history. In this action packed 4 in 1, it’s a cheddar-ific race against time!