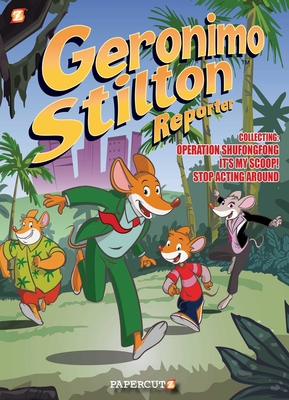 This is book number 1 in the Geronimo Stilton Reporter Graphic Novels series.

Geronimo Stilton would be more than happy to spend his days behind his desk working, reading, or playing a relaxing game of chess with his family. But, adventure always seems to come knocking on his door and Stilton is launched paw-first into capers in the underbelly of New Mouse City or in exotic locals around the world. Never one to miss out on an opportunity for a scoop for his newspaper, The Rodents’ Gazette, Geronimo Stilton is the mouse for the job! These three Geronimo Stilton Adventures “Operation Shufongfong,” “It’s My Scoop,” and “Stop Acting Around” bring Geronimo, Trap, Benjamin, and Thea Stilton to the far off jungle to interview an elusive prince, all over New Mouse City to stop a troublemaker who looks suspiciously like Geronimo, and finally to a film set to get his big break… or his big scoop! Based on the hit animated series!

Born in New Mouse City, Mouse Island, GERONIMO STILTON is Rattus Emeritus of Mousomorphic Literature and of Neo-Ratonic Comparative Philosophy. He is the director of The Rodent's Gazette, New Mouse City's most widely read daily newspaper. Stilton was awarded the Ratitzer Prize for his scoops on The Curse of the Cheese Pyramid and The Search for Sunken Treasure. One of his bestsellers won the 2002 eBook Award for world's best-selling electronic book. In 2006 he won a Nickelodeon Kids Choice Award and in 2008 he won the Cartoomics prize "Beyond Comics." His works have been published all over the globe. In his spare time, Mr. Stilton collects antique cheese rinds.