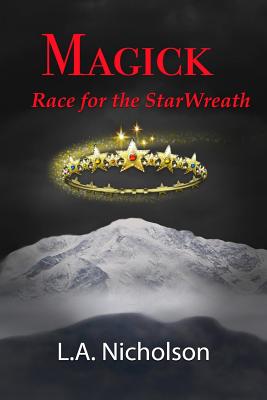 The Warlock of Wintermire flees to the high snowy mountains of Craghorn Springs in search of the ancient and powerful StarWreath - a fabled crown leaving terror, death and destruction in its wake. Linc and Summer join a small group of warriors, desperate to stop the Warlock from possessing the crown's powers. They cannot fail or their own world is in danger of falling under the Warlock's evil grasp.

The idea for the MAGICK series came to L.A. Nicholson in a dream, and she took the next four years to write the trilogy. A writer throughout her career, L.A. Nicholson built and managed a communications department of the largest international human resource consulting firm, and within three years was promoted to the first woman partner in the office. She later started her own successful consulting firm. L.A. Nicholson’s first published works came after playing Dungeons and Dragons. She and a friend authored several fantasy books and game modules, published by Mayfair Games. Some are considered collector’s items today. A graduate of Bowling Green State University in OH, L.A. Nicholson earned a Bachelor of Science degree in Journalism/ Public Relations. She and her husband currently reside in Southern California.