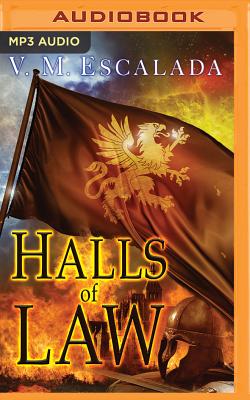 This is book number 1 in the Faraman Prophecy series.

the first book in the Faraman Prophecy epic fantasy series introduces a world of military might and magical Talents on the brink of destruction--and two unlikely heroes may be its only saviors.

Seventeen-year-old Kerida Nast has always wanted a career in the military, just like the rest of her family. So when her Talent is discovered, and she knows she'll have to spend the rest of her life as a psychic for the Halls of Law, Ker isn't happy about it. Anyone entering the Halls must give up all personal connection with the outside world, losing their family and friends permanently.

But just as Kerida is beginning to reconcile herself to her new role, the Faraman Polity is invaded by strangers from Halia, who begin a systematic campaign of destruction against the Halls, killing every last Talent they can find.

Kerida manages to escape, falling in with Tel Cursar, a young soldier fleeing the battle, which saw the deaths of the royal family. Having no obvious heir to the throne, no new ruler to rally behind, the military leaders will be divided, unable to act quickly enough to save the empire. And with the Halls being burned to the ground, and the Talents slaughtered, the Rule of Law will be shattered.