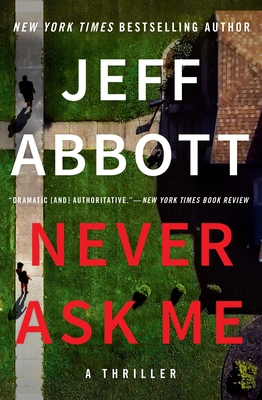 Each of us has a question we dread. When the simple community of Lakehaven is shaken by a violent crime, doubts begin to arise among the locals about whom they can trust.

In a quiet neighborhood in the wealthy Austin suburb of Lakehaven, the body of Danielle Roberts is discovered on a park bench. Danielle was a beloved member of the community, an adoption consultant who delivered the joy of parenthood to a number of local families. Her murder shocks Lakehaven.

Perhaps no other family is as crushed as the Pollitts, who lived two houses down from Danielle and thought of her almost like family. Her death becomes the catalyst for a maelstrom of suspicion and intrigue. You have been told a huge lie, an anonymous email charges the son, Grant. No one can learn the truth now, thinks the father, Kyle. Never ask me what I'd do to protect my family, resolves the wife, Iris. I'll do whatever it takes to save him, vows the daughter, Julia, of Danielle's grieving teenage son.

The Pollitts always thought they'd always be there for each other. When each begins to suspect the others of the unimaginable, the strength of their bonds will be tested in extraordinary new ways. The latest from New York Times bestselling author Jeff Abbott ishis most suspenseful thriller yet: a riveting tale of the dangerous secrets one family has concealed -- and what happens when the question each Pollitt hoped they'd never be asked threatens to expose their darkest truths.

Jeff Abbott is the New York Times bestselling author of eighteen novels. He is the winner of an International Thriller Writers Award (for the Sam Capra thriller The Last Minute) and is a three-time nominee for the Edgar Award. He lives in Austin with his family. You can visit his website at www.JeffAbbott.com.

PRAISE FOR NEVER ASK ME:
"Abbott writes in an authoritative way about the protocols, many of them maddening, of adopting a child. He also has a real understanding of the emotional roller-coaster couples going through the process must endure."
—New York Times Book Review

"No one exposes the dark, fraught underbelly of suburban America quite like Abbott, and his propulsive latest, depicting the relationships between families tied together via an overseas-adoption process, is a proper humdinger."—p.p1 {margin: 0.0px 0.0px 0.0px 0.0px; font: 12.0px Times}Boston Globe

"NEVER ASK ME produces almost unbearable tension and suspense. . . Readers will be kept guessing all the way to the end and most assuredly will be flipping back to some of the previous journal entries [to predict] the future events that Abbott deftly lays out for us as only he can."—p.p1 {margin: 0.0px 0.0px 0.0px 0.0px; font: 12.0px Times; color: #333333}Book Reporter

"Abbott uses his skills as a master storyteller to convey a complicated and ambitious tale that seems straightforward but is full of twists and red herrings. He also keeps the story moving without falling into clichés or over-the-top revelations. The mystery works because of the terrific characters and the beautiful road map he unveils while navigating the reader through a complex landscape. Those who enjoy unpredictable stories can never go wrong diving into the world of Jeff Abbott."—The Washington Post

"Like a stage magician, Abbott often seems to be doing one thing when he's actually doing something else, and when we realize what he's been up to, we can't help but shake our heads in admiration."—Booklist

"Abbott is a master of misdirection."—Library Journal