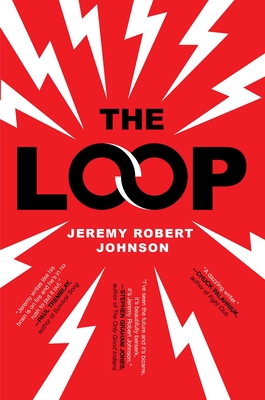 THE LOOP by Jeremy Robert Johnson

THE LOOP is mind-blowing body horror amped up to max. It’s Cronenberg meets Halloween III with a philosophy. Lucy, an adopted kid from Peru, and Bucket, a Pakistani immigrant, find kinship as outcasts in a small white town. After they witness a shocking act of violence in their classroom, they discover that the enhancement chips in the brains of privileged kids have been hacked by a psychotic test subject. A signal activates the chips, triggering savage outbursts, while causing tumors that invade the brains of the hosts. The grotesque, infectious mutations cause a bio-apocalypse, and as the horror hurricane hits Category 5, Lucy has an epiphany born of trauma and desperation – what good is survival if you lose your humanity? – R.J. Crowther Jr.

The year’s most brutal, cinematic thrill ride is also one of its most critically acclaimed novels. Dazed and Confused meets 28 Days Later in this “wickedly entertaining,” (Kirkus Reviews) “volcano of a book” (Nathan Ballingrud, author of Wounds) as a lonely young woman teams up with a group of fellow outcasts to survive the night in a town overcome by a science experiment gone wrong.

A Best Book of the Month for Den of Geek, Omnivoracious, Mystery & Suspense, and Tor.

A Goodreads’ 2020 Readers Choice Nominee for Best Horror, and one of the Best Books of 2020 for The Lineup, Booked, and Unsettling Reads.

Turner Falls is a small tourist town nestled in the hills of central Oregon. When a terrifying outbreak rapidly develops, this idyllic town becomes the epicenter of an epidemic of violence.

The Loop is a “wild and wonderfully scary novel” (Richard Chizmar, author of Gwendy’s Magic Feather) that offers a “hilarious and horrifying” (Brian Keene, author of The Rising) look at what one team of misfits can accomplish as they fight to live through the night.

“[A] harrowing thrill ride of the first order and an uncompromising page-turner, easily securing its spot as one of the best novels of 2020.” —Rue Morgue (featured “Dante’s Pick” Review)

“Like the best of Crichton or Bentley, it is a great beach read, but it is infused with the neon blood of a brave new writer... [A] kind of literary roller coaster. It will take you to thrilling highs and terrifying lows…” —Los Angeles Review of Books

“The Loop is the gore-soaked, anxiety-inducing, diabolically funny Richard Linklater/David Cronenberg mashup you never knew you wanted but can’t—or at least shouldn’t—live without.” —The Big Thrill

“Unputdownable...Fans of The Twilight Zone, The X-Files, and Stranger Things will be especially thrilled.” —Publishers Weekly (starred review)

“The Loop is the Cronenberg film we never got.” —Nathan Ballingrud, author of North American Lake Monsters and Wounds

Jeremy Robert Johnson is the author of the critically acclaimed collection Entropy in Bloom as well as the breakthrough cult novel Skullcrack City. His fiction has been praised by The Washington Post and Publishers Weekly, authors such as David Wong, Chuck Palahniuk, and Jack Ketchum, and has appeared internationally in numerous anthologies and magazines. In 2008, he worked with The Mars Volta to tell the story behind their Grammy Award–winning album, The Bedlam in Goliath. In 2010 he spoke about weirdness and metaphor as a survival tool at the Fractal 10 conference in Medellin, Colombia. In 2017, his short story “When Susurrus Stirs” was adapted for film and won numerous awards including the Final Frame Grand Prize and Best Short Film at the H.P. Lovecraft Film Festival. Jeremy is intermittently social over at Facebook, Instagram, and Twitter @JRL_Is_Probable.

"Unputdownable…Fans of The Twilight Zone, The X-Files, and Stranger Things will be especially thrilled."
— Publishers Weekly, starred review

“A satisfyingly dark satire of, well, everything…Imagine Blake Crouch and Mira Grant re-writing Chuck Wendig's Wanderers (2019)—fans of all three authors are part of the wide audience who will flock to this heart-pounding and deeply unsettling tale.”
— Booklist

"The Loop is the Cronenberg film we never got. It's a volcano of a book: violent, compassionate, relentless, and opulently strange."—Nathan Ballingrud, author of North American Lake Monster and Wounds

"I've seen the future and it's bizarre, it's beautifully berserk, it's Jeremy Robert Johnson."—Stephen Graham Jones

“Jeremy writes like his brain is on fire and he’s in no rush to put it out.” —Paul Tremblay, author of Survivor Song

"The Loop is hilarious and horrifying."—Brian Keene, author of The Rising