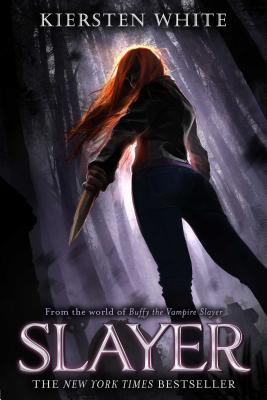 This is book number 1 in the Slayer series.

It  kinda slays me to do the math and realize that it’s been more than 20 years since “Buffy the Vampire Slayer” aired on television. There was a time – while working on two of the non-fiction companion volumes for “Buffy” and “Angel” – that I was at least as invested in the lives of the characters and the events in their universe as I was in the lives of some of my real life friends. I was incredibly enthusiastic when Kiersten announced that the licensors had rebooted the tie-in novels line, with her as the author. Slayer does a fabulous job of being true to the sensibility and girl power of the show, novels, and comics, while also being accessible to readers who may be new to Slayers, Watchers, Hellmouths, and more. I read it like a nice life update from a friend I hadn’t heard from in a while, and am excited for more.

“Will get Buffy fans up in their feels.” —Entertainment Weekly

From bestselling author Kiersten White comes the first novel in a series set in the world of Buffy the Vampire Slayer that introduces a new Slayer as she grapples with the responsibility of managing her incredible powers that she’s just beginning to understand.

Into every generation a Slayer is born…

Nina and her twin sister, Artemis, are far from normal. It’s hard to be when you grow up at the Watcher’s Academy, which is a bit different from your average boarding school. Here teens are trained as guides for Slayers—girls gifted with supernatural strength to fight the forces of darkness. But while Nina’s mother is a prominent member of the Watcher’s Council, Nina has never embraced the violent Watcher lifestyle. Instead she follows her instincts to heal, carving out a place for herself as the school medic.

Thanks to Buffy, the famous (and infamous) Slayer that Nina’s father died protecting, Nina is not only the newest Chosen One—she’s the last Slayer, ever. Period.

As Nina hones her skills with her Watcher-in-training, Leo, there’s plenty to keep her occupied: a monster fighting ring, a demon who eats happiness, a shadowy figure that keeps popping up in Nina’s dreams…

But it’s not until bodies start turning up that Nina’s new powers will truly be tested—because someone she loves might be next.

One thing is clear: Being Chosen is easy. Making choices is hard.

Kiersten White is the New York Times bestselling author of many books for teens and young readers, including And I Darken, Now I Rise, Bright We Burn, The Dark Descent of Elizabeth Frankenstein, and Slayer. She lives with her family near the ocean in San Diego, where she perpetually lurks in the shadows. Visit Kiersten online at KierstenWhite.com and follow @KierstenWhite on Twitter.