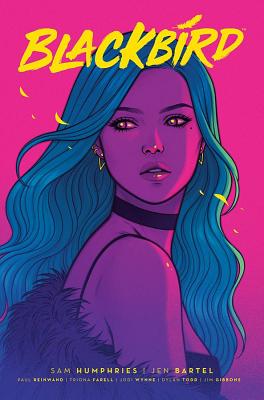 An iridescent neo-noir fantasy set in the glitz and grit of Los Angeles, volume 1 of Blackbird collects the first 6 issues of the new Image comic. Teal-haired heroine Nina Rodriguez knows something everyone else doesn’t – that powerful cabals of magic-wielders known as paragons hiding in plain sight rule over LA. But when her sister is kidnapped by a powerful demon known as The Great Beast, Nina finds herself caught in the middle of a territory war only to find that she might not know the truth at all. Filled with gorgeous artwork and magic spells, this series is definitely a new favorite of mine!

Included in Tor.com's Best Comics of 2018
Included in Book Riot's Best Comics of 2018 Much like BARTEL's art, the world of BLACKBIRD thrums with a fantastical undercurrent, and the moments when it spills through to the surface are supremely satisfying. -KELLY SUE DeCONNICK (BITCH PLANET) Nina Rodriguez knows there's a hidden magical world run by ruthless cabals hiding in Los Angeles. And when a giant magic beast kidnaps her sister, Nina must confront her past (and her demons) to get her sister back and reclaim her life. Perfect for fans of SYFY's The Magicians, CW's Riverdale, and THE WICKED + THE DIVINE, don't miss the first collection of the smash-hit neo-noir fantasy series from fan-favorite writer SAM HUMPHRIES (Harley Quinn, Nightwing) and red-hot artist JEN BARTEL (Black Panther, Mighty Thor) Collects BLACKBIRD #1-6.