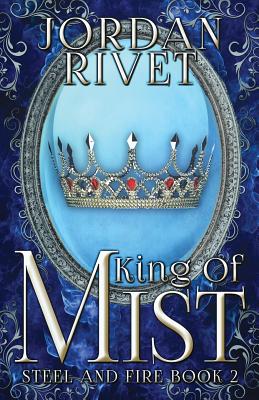 This is book number 2 in the Steel and Fire series.

A reluctant king. A swordswoman with a secret. A plot that could destroy them both.

When Siv Amintelle ascends the throne of Vertigon, he's condemned to the drudgery of council meetings, strategic marriages, and the intrigues of ambitious noblemen. There aren't nearly enough sharp, pointy objects involved, and a certain swordswoman makes him want to abandon his duties at every opportunity. But the Peace of Vertigon is over, and unknown foes conspire to end Siv's reign before it truly begins.

Dara Ruminor takes her new position as a Castle Guard very seriously. She refuses to allow her feelings for Siv to get in the way of protecting him, no matter how hard it is to keep her distance. But she's keeping secrets from her king-and the one involving a fiery newfound ability is getting harder to hide.

As their enemies' plots intensify, Dara and Siv seek help from an unlikely source. But if her secrets get out, Dara will have bigger problems than thwarting assassinations. And Siv might decide not to trust her after all.

Read all the adventures set in the immersive fantasy world of Steel and Fire:

Jordan Rivet is an American author of swashbuckling fantasy and post-apocalyptic adventures set at sea. Originally from Arizona, she lives in Hong Kong with her husband. She was a fencer for many years and hasn't made up her mind about whether the pen is mightier than the sword.