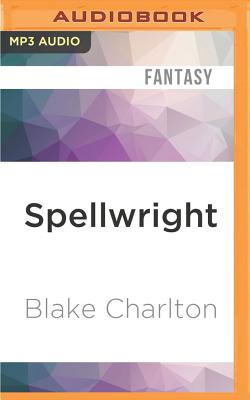 This is book number 1 in the Spellwright Trilogy series.

Nicodemus is a young, gifted wizard with a problem. Magic in his world requires the caster to create spells by writing out the text...but he has always been dyslexic and thus has trouble casting even the simplest of spells. And his misspells could prove dangerous, even deadly, should he make a mistake in an important incantation. Yet he has always felt that he is destined to be something more than a failed wizard.

When a powerful, ancient evil begins a campaign of murder and disruption, Nicodemus starts to have disturbing dreams that lead him to believe that his misspelling could be the result of a curse. But before he can discover the truth about himself, he is attacked by an evil that has already claimed the lives of fellow wizards and has cast suspicion on his mentor. He must flee for his own life if he's to find the true villain. But more is at stake than his abilities. For the evil that has awakened is a power so dread and vast that if unleashed, it will destroy Nicodemus...and the world.