No Country for Old Gnomes: The Tales of Pell (Hardcover) 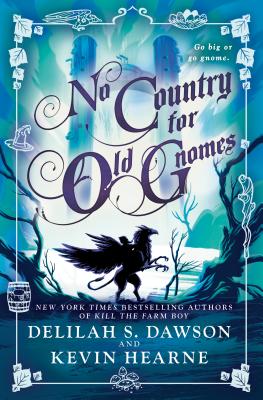 This is book number 2 in the The Tales of Pell series.

Imagine if The Lord of the Rings movies were produced by the fellas of Monty Python; that is how I saw No Country for Old Gnomes play out in my head. The writing talents of Delilah Dawson and Kevin Hearne have joined once again and produced another hilarious gem of a fantasy novel. No trope is deemed too sacred to not be made fun of by this author-pair. Every page was a delight, filled with cheeky humor and countless references to other well-known fantasy stories. For those who’ve been left reeling after finishing a seriously thrilling fantasy series, this novel is also a perfect palate cleanser for the brain. After reading No Country for Old Gnomes and its predecessor Kill the Farm Boy, I can’t wait to see what the third and final book in the Pell series will have in store.

Go big or go gnome. The New York Times bestselling authors of Kill the Farm Boy welcome you to the world of Pell, the irreverent fantasy universe that recalls Monty Python and Terry Pratchett.

War is coming, and it’s gonna be Pell.

On one side stand the gnomes: smol, cheerful, possessing tidy cardigans and no taste for cruelty.

On the other side sit the halflings, proudly astride their war alpacas, carrying bags of grenades and hungry for a fight. And pretty much anything else.

It takes only one halfling bomb and Offi Numminen’s world is turned upside down—or downside up, really, since he lives in a hole in the ground. His goth cardigans and aggressive melancholy set him apart from the other gnomes, as does his decision to fight back against their halfling oppressors. Suddenly Offi is the leader of a band of lovable misfits and outcasts—from a gryphon who would literally kill for omelets to a young dwarf herbalist who is better with bees than with his cudgel to an assertive and cheerful teen witch with a beard as long as her book of curses—all on a journey to the Toot Towers to confront the dastardly villain intent on tearing Pell asunder. These adventurers never fit in anywhere else, but as they become friends, fight mermaids, and get really angry at this one raccoon, they learn that there’s nothing more heroic than being yourself.

In No Country for Old Gnomes, Delilah S. Dawson and Kevin Hearne lovingly tweak the tropes of fantasy and fairy tales. Here you’ll find goofy jokes and whimsical puns, but you’ll also find a diverse, feminist, and lighthearted approach to fantasy that will bring a smile to your face and many fine cheeses to your plate.

Kevin Hearne hugs trees, pets doggies, and rocks out to heavy metal. He also thinks tacos are a pretty nifty idea. He is the author of A Plague of Giants and the New York Times bestselling The Iron Druid Chronicles series.

“Hilarious . . . Dawson and Hearne present another puntastic adventure set in the universe of their Tales of Pell series [with] laugh-out-loud trials, tribulations, and wanderings of a completely new band of endearing eccentrics.”—Booklist

“No Country For Old Gnomes is good fun, full of laughs, clever details, and characters . . . in whom you may see a little of yourself.”—Elitist Book Reviews