Behind the Scenes: Formerly a Slave, But More Recently Modiste, and Friend to Mrs. Abraham Lincoln (Paperback) 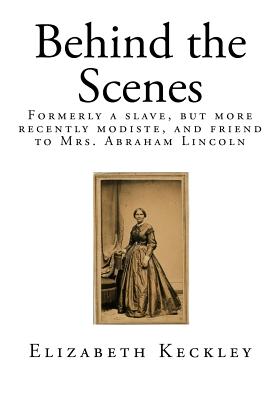 Formerly a slave, but more recently modiste, and friend to Mrs. Abraham Lincoln

Elizabeth Hobbs Keckley (sometimes spelled Keckly; February 1818 - May 1907) was a former slave who became a successful seamstress, civil activist and author in Washington, DC. She was best known as the personal modiste and confidante of Mary Todd Lincoln, the First Lady. Keckley had moved to Washington in 1860 after buying her freedom and that of her son in St. Louis. She created an independent business in the capital based on clients who were the wives of the government elite. Among them were Varina Davis, wife of Jefferson Davis; and Mary Anna Custis Lee, wife of Robert E. Lee.

After the American Civil War, Keckley wrote and published an autobiography, Behind the Scenes: Or, Thirty Years a Slave and Four Years in the White House (1868). It was both a slave narrative and a portrait of the First Family, especially Mary Todd Lincoln, and considered controversial for breaking privacy about them. It was also her claim as a businesswoman to be part of the new mixed-race, educated middle-class that were visible among the leadership of the black community.

Keckley's relationship with Mary Todd Lincoln, the President's wife, was notable for its personal quality and intimacy, as well as its endurance over time.

I have often been asked to write my life, as those who know me know that it has been an eventful one. At last I have acceded to the importunities of my friends, and have hastily sketched some of the striking incidents that go to make up my history. My life, so full of romance, may sound like a dream to the matter-of-fact reader, nevertheless everything I have written is strictly true; much has been omitted, but nothing has been exaggerated. In writing as I have done, I am well aware that I have invited criticism; but before the critic judges harshly, let my explanation be carefully read and weighed. If I have portrayed the dark side of slavery, I also have painted the bright side. The good that I have said of human servitude should be thrown into the scales with the evil that I have said of it. I have kind, true-hearted friends in the South as well as in the North, and I would not wound those Southern friends by sweeping condemnation, simply because I was once a slave. They were not so much responsible for the curse under which I was born, as the God of nature and the fathers who framed the Constitution for the United States. The law descended to them, and it was but natural that they should recognize it, since it manifestly was their interest to do so. And yet a wrong was inflicted upon me; a cruel custom deprived me of my liberty, and since I was robbed of my dearest right, I would not have been human had I not rebelled against the robbery. God rules the Universe. I was a feeble instrument in His hands, and through me and the enslaved millions of my race, one of the problems was solved that belongs to the great problem of human destiny; and the solution was developed so gradually that there was no great convulsion Pg 4] of the harmonies of natural laws. A solemn truth was thrown to the surface, and what is better still, it was recognized as a truth by those who give force to moral laws. An act may be wrong, but unless the ruling power recognizes the wrong, it is useless to hope for a correction of it. Principles may be right, but they are not established within an hour.