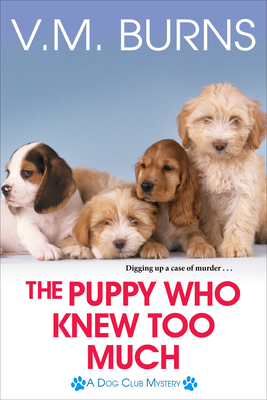 This is book number 2 in the A Dog Club Mystery series.

Lilly Echosby and her toy poodle Aggie find a fresh start in Chattanooga, Tennessee, spoiled by the scent of murder . . .

Having solved the shooting death of her cheating husband, Lilly's left behind the drama of Lighthouse Dunes, Indiana, to start over in the hometown of her best friend, Scarlett "Dixie" Jefferson. As she gets settled in her new rented house, Lilly gives Aggie, short for Agatha Christie, her own fresh start by enrolling her in the Eastern Tennessee Dog Club, where Dixie is a trainer.

But drama seems to hound Lilly like a persistent stray. Her cranky new neighbor appears unfamiliar with Southern hospitality and complains that Aggie barks too much and digs up his prized tulips. But what the poodle actually unearths is the buried body of a mysterious man who claimed ownership of the lost golden retriever Lilly recently rescued. Now it's up to Lilly and Dixie to try to muzzle another murderer . . .

V. M. Burns was born and raised in South Bend, Indiana. She currently resides in Tennessee with her two poodles, Coco and Kenzie. Valerie is a member of Mystery Writers of America and a lifetime member of Sisters in Crime. Readers can visit her website at www.vmburns.com.