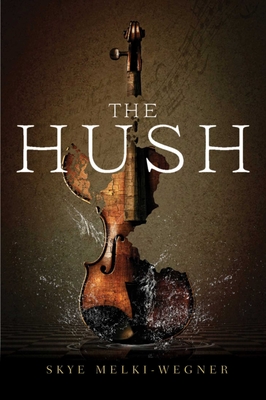 Chester has taken to the road, traveling from village to village desperately searching for his father, who has disappeared. One night while fiddling to earn a few coins, he accidentally connects to the Song—the music that fuels every aspect of the world, and that it’s illegal for him to interact with. He’s caught and sentenced to death for his crime. Only a licensed Songshaper can bend music to his will.

But someone in the crowd—a member of the infamous Nightfall Gang—stages a daring rescue and whisks Chester into the Hush, a shadowy nightmare mirror-world where Music can be deadly and Echoes can kill.

Susanna, the Captain of the Nightfall Gang has been watching Chester. She needs him to pull off an elaborate plan that will take down the governing body that keeps her an outlaw and made her the fragment she is. Susanna needs him to exact her revenge, even if he dies doing it.

Combining complex stakes, shifting loyalties, nods to fairy tales, and a Western feel, The Hush is a lush and exhilarating fantasy perfect for fans of Catherine Fisher’s Incarceron and Paolo Bacigalupi’s Ship Breaker.

Skye Melki-Wegner has been a saleswoman, an English tutor, and a popcorn-wrangler. In addition to writing fiction, in her spare time she devours a ridiculous amount of caffeine and fantasy literature. She lives in Melbourne, Australia.

"A fantastically imaginative and original story of music-based magic and Robin Hood-style outlaws. If you loved Firefly, this one's a must-read. I've been handing The Hush to everyone I know." —Amie Kaufman, New York Times bestselling author of Illuminae and These Broken Stars

*"Chester Hays has been on the road for months, searching for his vanished father.The 17-year-old plays his fiddle in return for room and board, but one night at a Hamelin saloon, he's caught tapping into the Song, the source of life in a world where Music is magic and only licensed Songshapers are allowed to connect to "the heartbeat of the world." His punishment for committing this blasphemy: death. Fate intervenes when the ambiguously "tan" Chester is rescued from the chopping block by the infamous Nightfall Gang. There's mercurial, burly, white cowboy Sam; white lesbian Dot, an inventive Songshaper; foppish, brown-skinned lady's man Travis; and pale-skinned, trouser-wearing redhead Susannah, their headstrong captain. This group of teenage, Robin Hood-esque outlaws travels in their echoship through the Hush, a terrifying distorted parallel reality formed from excess Music and populated by deadly Echoes. The Nightfall Gang may hold the clues to Chester's father's disappearance, but the only way he'll find out is to go along with a very dangerous plan that might cost Chester his life. The story is beautifully paced as it unfolds one tantalizing, shocking detail at a time. Masterfully drawn details are so crisp, so tangible, that readers will be surprised they can't just reach out and touch this rich world. A steampunk-tinged fantasy adventure with plenty of breath-holding action." —Kirkus Reviews, starred review

"Spectacular and breathtaking, The Hush is a coming-of-age story with revenge and friendship where Music is magic, beautiful, and dangerous." —Seattle Book Review