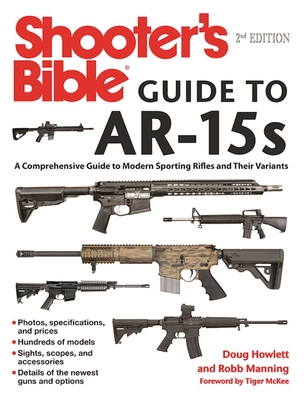 Shooter's Bible, for generations the most trusted source of detailed information on firearms, offers gun enthusiasts the most recent information and specs on the popular AR-15 rifle.

There’s no denying the popularity and intense fascination with AR-15s among firearms enthusiasts today. Interest has grown rapidly over the past decade, spurred by the versatility of modern sporting rifles in addition to increased performance. Here, inside the most comprehensive source to date in a newly updated second edition, is Doug Howlett’s expert approach to everything from the intriguing history of the AR to breaking down the weapon piece by piece, choosing ammunition, and even building your own gun.

In this complete book of AR-style firearms, you can peruse the products of all manufacturers, learn about the evolution of the AR from its uses in the military in the 1960s to its adaptation for law enforcement and civilian uses, and gain essential knowledge on the parts and functions of the rifle.

Also included are chapters on customizing and accessorizing ARs, with a special focus on builders in small gun shops and their unique and successful products. Look into the future of the AR straight from top gun authorities!

Doug Howlett is an award-winning editor and writer who grew up hunting and shooting. He began his writing career as a newspaper reporter before combining his passions for writing and the outdoors at the National Rifle Association, where he worked as assistant editor of American Hunter magazine. He has served as editor-in-chief of Turkey Call magazine at the National Wild Turkey Federation, deputy editor at Outdoor Life magazine and, most recently, as editor of Gun Digest magazine. It was on a hunt he covered for Outdoor Life that he discovered the absolute thrill of hunting with modern tactical rifles. Howlett lives in Virginia Beach, Virginia, with his wife and three kids.

John Zent is the NRA publications editorial director. Over his career, he has worked at American Rifleman and American Hunter. In 2010, he was given the Outdoor Writer of the Year award by Carl Zeiss Sports Optics. He resides in Fairfax, Virginia.