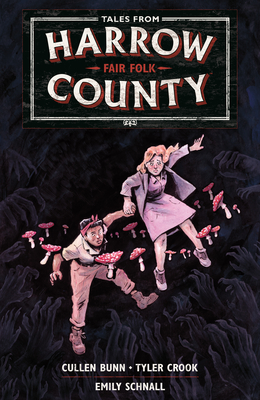 Harrow County is back! The award-winning, Eisner-nominated southern-gothic horror series returns with a brand-new story.


Fresh off the loss of her goblin friend to a strange portal, Bernice must weigh her responsibilities as protector of Harrow County with her desire to get her companion back safe and sound. But the past weighs heavily and the fair folk use Bernice’s use her memories against her.

And something more disastrous than she could have feared may be around the corner to threaten both the worlds of Man and of haints.

Cullen Bunn is an American writer of comic books, short stories and novelist, known for his work on comic books such as Deadpool Marvel Comics, The Damned and The Sixth Gun for Oni Press, and Harrow County for Dark Horse. His novel work includes the middle reader horror series Crooked Hills and his short story work includes the anthology collection Creeping Stones & Other Stories. In 2011 Bunn was nominated for a Ghastly Awards, and won Broken Frontier's Best Writer Independent Award. In 2012 he was nominated for a Bram Stoker Award and an Eisner Award.