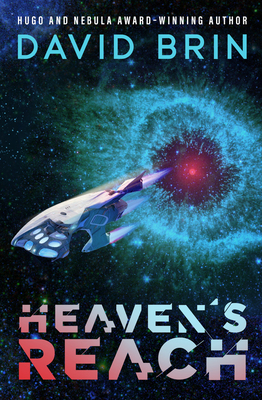 Prepare for a harrowing ride through the universe by the New York Times-bestselling author of Startide Rising and The Postman.

The peaceful existence of six outcast races on Jijo has ended. Ancient enemies, the Jophur, have discovered them, preparing to subject the refugees to their dark, perverted plans.

The Jijoans' only hope is the same ship that accidently led their foes to the planet. The Earthship Streaker, with its crew of uplifted dolphins and a human commander, must somehow lure the Jophur into a chase through space . . . into the unknown. And then into the weird.

More than just the fate of Jijo--or that of distant Earth, also suffering a deadly siege--hangs in the balance. Some believe a terrifying prophecy is about to come true, one that involves Streaker's trove of artifacts coveted by factions throughout all Five Galaxies. As countless white dwarf stars verge on unexpected explosion, all sentient life in the universe appears to be at risk unless someone can save them.

Praise for the Hugo and Nebula Award-winning Uplift Saga

"The Uplift books are as compulsive reading as anything ever published in the genre." --The Encyclopedia of Science Fiction

"An exhilarating read that encompasses everything from breathless action to finely drawn moments of quiet intimacy." --Locus on The Uplift War

David Brin is an astrophysicist whose international-bestselling novels include Earth, Existence, Startide Rising, and The Postman, which was adapted into a film in 1998. Brin serves on several advisory boards, including NASA's Innovative Advanced Concepts program, or NIAC, and speaks or consults on topics ranging from AI, SETI, privacy, and invention to national security. His nonfiction book about the information age, The Transparent Society, won the Freedom of Speech Award of the American Library Association. Brin's latest nonfiction works are Polemical Judo and Vivid Tomorrows: Science Fiction and Hollywood. Visit him at www.davidbrin.com.