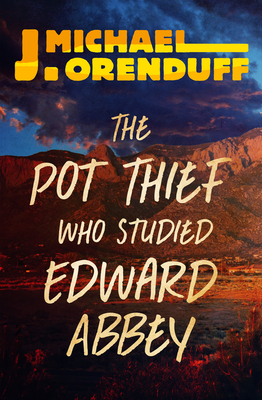 This is book number 8 in the Pot Thief Mysteries series.

The pot thief is going back to school, but someone on campus is trying for a different kind of degree--murder in the first--in this "smartly funny series" (Anne Hillerman).

Before making a somewhat notorious name for himself as a salvager of antiquated pottery and other desert artifacts, Hubie Schuze was an eager student at the University of New Mexico--right up until they booted him out. Now, he's back at UNM as a pottery teacher. It should be a breeze, but campus life has changed dramatically in the past twenty-five years. From cell phones to trigger warnings to sensitivity workshops, Hubie has to get up to speed fast or risk losing control of his class.

But his dismay at the state of modern academia takes a back seat when a young beauty working as a life model is murdered--and Hubie becomes a suspect. Taking the investigation into his own hands, he soon uncovers a wide palette of sketchy suspects that includes both the self-involved student body and the quarrelsome art school faculty.

But what he doesn't know is that the murderer has a new artistic project in the works: a headstone for the grave of Hubie Schuze . . .

The Pot Thief Who Studied Edward Abbey is the 8th book in the Pot Thief Mysteries, but you may enjoy reading the series in any order.

J. Michael Orenduff grew up in a house so close to the Rio Grande that he could Frisbee a tortilla into Mexico from his backyard. While studying for an MA at the University of New Mexico, he worked during the summer as a volunteer teacher at one of the nearby pueblos. After receiving a PhD from Tulane University, he became a professor. He went on to serve as president of New Mexico State University. Orenduff took early retirement from higher education to write his award-winning Pot Thief murder mysteries, which combine archaeology and philosophy with humor and mystery. Among the author's many accolades are the Lefty Award for best humorous mystery, the Epic Award for best mystery or suspense ebook, and the New Mexico Book Award for best mystery or suspense fiction. His books have been described by the Baltimore Sun as "funny at a very high intellectual level" and "deliciously delightful," and by the El Paso Times as "the perfect fusion of murder, mayhem and margaritas."