Atomic Steppe: How Kazakhstan Gave Up the Bomb (Paperback) 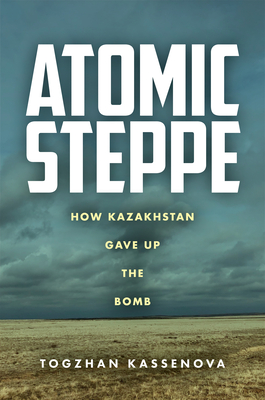 Atomic Steppe tells the untold true story of how the obscure country of Kazakhstan said no to the most powerful weapons in human history. With the fall of the Soviet Union, the marginalized Central Asian republic suddenly found itself with the world's fourth largest nuclear arsenal on its territory. Would it give up these fire-ready weapons--or try to become a Central Asian North Korea?

This book takes us inside Kazakhstan's extraordinary and little-known nuclear history from the Soviet period to the present. For Soviet officials, Kazakhstan's steppe was not an ecological marvel or beloved homeland, but an empty patch of dirt ideal for nuclear testing. Two-headed lambs were just the beginning of the resulting public health disaster for Kazakhstan--compounded, when the Soviet Union collapsed, by the daunting burden of becoming an overnight nuclear power.

Equipped with intimate personal perspective and untapped archival resources, Togzhan Kassenova introduces us to the engineers turned diplomats, villagers turned activists, and scientists turned pacifists who worked toward disarmament. With thousands of nuclear weapons still present around the world, the story of how Kazakhs gave up their nuclear inheritance holds urgent lessons for global security.

Togzhan Kassenova is senior fellow at the University at Albany, SUNY and a nonresident fellow of the Carnegie Endowment for International Peace.