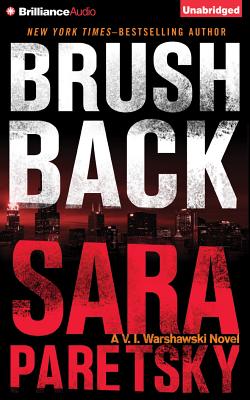 This is book number 17 in the V. I. Warshawski series.

No one would accuse V. I. Warshawski of backing down from a fight, but there are a few she'd be happy to avoid. High on that list is tangling with Chicago political bosses. Yet that's precisely what she ends up doing when she responds to Frank Guzzo's plea for help.

For six stormy weeks back in high school, V. I. thought she was in love with Frank. He broke up with her, she went off to college, he started driving trucks for Bagby Haulage. She forgot about him until the day his mother was convicted of bludgeoning his kid sister, Annie, to death. Stella Guzzo was an angry, uncooperative prisoner and did a full twenty-five years for her daughter's murder.

Newly released from prison, Stella is looking for exoneration, so Frank asks V. I. for help. V. I. doesn't want to get involved. Stella hated the Warshawskis, in particular V. I.'s adored mother, Gabriella.

But life has been hard on Frank and on V. I.'s other childhood friends, still stuck on the hardscrabble streets around the dead steel mills, and V. I. agrees to ask a few questions. Those questions lead her straight into the vipers' nest of Illinois politics she's wanted to avoid. When V. I. takes a beating at a youth meeting in her old hood, her main question becomes whether she will live long enough to find answers.