A Flicker of a Doubt (A Fairy Garden Mystery #4) (Paperback) 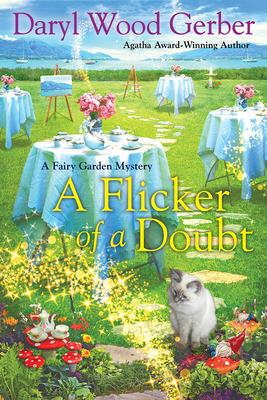 This is book number 4 in the A Fairy Garden Mystery series.

From Agatha Award-winning author Daryl Wood Gerber, the fourth in an enchantingly whimsical series featuring Courtney Kelly, the owner of a fairy-gardening and tea shop in Carmel, California. It’s a special place brimming with good vibes and the kind of magical assistance its proprietor will need to investigate a shocking murder at a prestigious art show!

Making fairy gardens, and teaching crafters how to do the same, keeps Carmel-by-the-Sea shop owner Courtney Kelly busy—but sometimes she has to make time for a wee bit of detective work . . .

With a theater foundation tea and an art show planned at Violet Vickers’s estate, Courtney is hired to create charming fairy gardens for the event. It’s not so charming, however, when her best friend Meaghan’s ex-boyfriend turns out to be Violet’s latest artistic protégé. Even worse, not long after Meaghan locks horns with him, his body is found in her yard, bludgeoned with an objet d’murder.

There’s a gallery of suspects, from an unstable former flame to an arts and crafts teacher with a sketchy past. But when the cops focus on Meaghan’s business partner, who’s like a protective older brother to her, and discover he also has a secret financial motive, Courtney decides to draw her own conclusions. Fearing they’re missing the forest for the trees, and with some help from Fiona the sleuthing fairy, she hopes to make them see the light . . .

Daryl Wood Gerber is the Agatha Award-winning, nationally bestselling author of the Fairy Garden Mysteries, the French Bistro Mysteries, and the Cookbook Nook Mysteries, as well as the Cheese Shop Mysteries written under the name Avery Aames. She also writes standalone suspense novels and the Aspen Adams Novels of Suspense. Prior to her career as a novelist, she was an actress with roles in television shows including "Murder, She Wrote," and she wrote for the popular TV sitcom "Out of this  World." Originally from the Bay Area, she now lives in Southern California where she likes to cook, garden and spend time with her frisky Goldendoodle named Sparky. Visit her online at DarylWoodGerber.com.

“A charming cozy with gardening tips, recipes, and a raft of suspects for those who don’t believe in fairies. —Kirkus Reviews on A Hint of Mischief

“Lively characters and plenty of action keep the pages turning. Paranormal cozy fans will have a ball.” —Publishers Weekly on A Glimmer of a Clue

“A tale of perseverance, murder, and a sprinkling of magic in California… Even readers who aren’t tempted to create a fairy garden may be enticed by the recipes appended to this appealing cozy.” —Kirkus Reviews on A Glimmer of a Clue

“If you believe or want to believe in magic THIS is an enjoyable read.” —CrimeReads on A Glimmer of a Clue

“Anyone who remembers the Peter Pan line, ‘Do you believe in fairies?’ will enjoy this enchanting book that has charm and wit, friends and foes, murder and mayhem with fascinating characters.” —Crimespree Magazine on A Glimmer of a Clue

“Enchanting...Cozy fans will wish upon a star for more.” —Publishers Weekly on A Sprinkling of Murder

“After finishing the book fans might want to try their hand at making their own fairy garden, or taste test the delectable recipes in the back of the book. And of course, readers will already impatiently be waiting for book number two. Fans of fantasy cozy series and this author will absolutely love this bestseller-bound tale.” —Mystery Scene on A Sprinkling of Murder

“Likeable characters, including several who should continue to play roles in future investigations, and an entertaining but not-too-intrusive fairy connection make this a winner.” —Booklist on A Sprinkling of Murder

“Fairies flutter throughout.” —Kirkus Reviews on A Sprinkling of Murder

“The addition of real fairies adds a delightful twist to your standard culinary cozy. Courtney is an engaging heroine backed by a fun, diverse cast.” —Criminal Element on A Sprinkling of Murder