Gone But Not For Garden (A Goddess of Greene St. Mystery #4) (Mass Market) 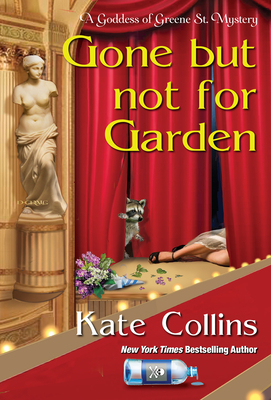 This is book number 4 in the A Goddess of Greene St. Mystery series.

New York Times bestselling author Kate Collins pairs Abby Knight, her sleuth from her Hallmark Channel Flower Shop Mysteries, with Athena Spencer, a single mom from a big Greek-American family, as they investigate a crime of fashion in the idyllic town of Sequoia, Michigan…

Athena Spencer works with her big Greek-American family (whom she also anonymously blogs about) at their garden center near Lake Michigan. She’s also gained a reputation for crime-solving—and that’s what brings flower-shop owner and fellow sleuth Abby Knight Salvare to her door . . .
Abby has come from Indiana to this Lake Michigan town to help her cousin, Jillian, who was emceeing a local fashion show and now stands accused of murdering one of the models. Some of Sequoia’s most prominent citizens were there on the catwalk, so there’s increasing pressure to have the next event be a perp walk.

The clueless Jillian is in jail after ignoring orders not to leave town, and she isn’t happy—orange is not her color. Along with her handsome PI partner, Case, Athena starts making inquiries, while tiptoeing around the wives of the town’s mayor and police chief. In the meantime, the two detectives are becoming fast friends. After all, in addition to homicide, Abby and Athena share an interest in horticulture—though right now the only thing they’re growing is their list of suspects . . .

Kate Collins is the New York Times bestselling author of the Flower Shop Mystery series, the Goddess of Greene Street Mysteries, and numerous historical romances. Her popular Flower Shop Mystery series ran for 19 installments, three of which adapted by Hallmark Movies & Mysteries® into original television movies starring Brooke Shields and Brennan Elliott. An Indiana native, Kate graduated from Purdue University with a master's degree in education. She loves to garden and lives in Northwest Indiana and Key West, Florida. Visit her online at KateCollinsBooks.com.

“Mean girls, stalkers, and a jealous brother are all fair game as suspects in this clever and amusing mystery.” —Kirkus Reviews on Big Fat Greek Murder

“A well-paced and funny book surrounded by a believable and colorful family, enriched by the Lake Michigan setting. The setup at the end for the next novel presenting a path forward for Case and Athena made me eager for more. Bravo!” —Mystery Scene Magazine on Big Fat Greek Murder

“Adding real spice to the book are blog entries by Goddess Anon – a.k.a. Athena – running as It’s All Greek to Me…This specific detail of her also being a blogger really made the book a standout for me.” —Aunt Agatha’s Bookstore on Big Fat Greek Murder

“Collins introduces a divorced mother who's returned to Michigan and the suffocating bosom of her Greek family…[A] charming heroine.” —Kirkus Reviews on Statue of Limitations

“Fun characters that will grow readers.” —The Parkersburg News & Sentinel on Statue of Limitations

“The strong bonds of the Greek family and Athena’s efforts to find her place within them are relatable and fascinating, and only enhanced by descriptions of delicious pastitsio and spanakopita Greek cuisine. In Athena Spencer author Kate Collins gives readers a new heroine to root for, one surrounded by a family that exasperates, frustrates, and completely loves her.” —Kings River Life Magazine on Statue of Limitations